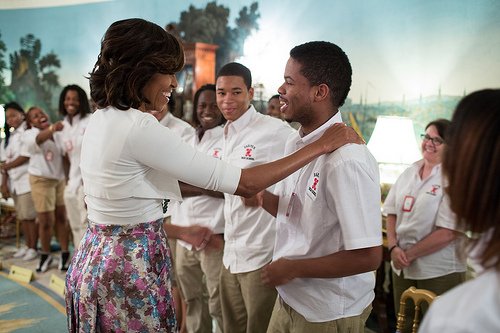 In April, the First Lady addressed a joint luncheon in Chicago, IL hosted by Mayor Rahm Emanuel. Mrs. Obama urges Chicago’s business and civic leaders to invest in expanded opportunities for young people in neighborhoods throughout the city. Following the event, the First Lady met with a small group of students and counselors at William R. Harper High School to hear firsthand about their experiences. After extending an invitation to the students, the First Lady met with them at the White House.

At the time of her speech in April, Harper High School, a Chicago public school, was profoundly affected by gun violence including 29 current or former students who were shot in the past year; 8 of them died.

Video from the First Lady’s speech on April 10, 2013: http://www.whitehouse.gov/photos-and-video/video/2013/04/10/first-lady-michelle-obama-speaks-meeting-address-youth-violence