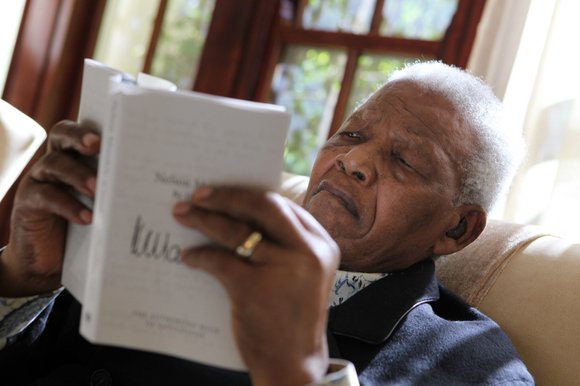 Nelson Mandela reads an advanced copy of his new book Nelson"Mandela by himself" the authorized quotation book.

Mandela, 94, has been in serious but stable condition since being rushed to a Pretoria hospital with a recurring lung infection, the president's office has said. On Wednesday, Zuma signaled some optimism.

"I am happy to report that Madiba is responding better to treatment from this morning," Zuma told Parliament ahead of a budget address, using the clan name by which Mandela is widely referred to in South Africa. "We are very happy with the progress that he is now making, following a difficult last few days.

"We appreciate the messages of support from all over the world. ... We urge South Africans and the international community to continue to keep President Mandela and the medical team in their thoughts and prayers."

In a written statement, Mandela's grandson Nkosi Zwelivelile Mandela said they had been touched and heartened by the outpouring of public prayers and good will during "a difficult period for the Mandela family."

"We are fully cognizant of the fact that millions of people in the country and around the world regard Madiba as their parent and therefore are as much concerned about his well-being as we are," he said.

The family is satisfied with the care Mandela is receiving and shares everyone's hope for his recovery, he said. The grandson also thanked the doctors, government and ruling African National Congress for their support.

As Mandela lay in the hospital, children left hand-drawn "get well" cards and message outside his Johannesburg home, reflecting the affection with which the nation regards its former president.

Over the weekend, the president's office said Mandela was breathing on his own and his wife was by his side. Mandela's daughter Zenani Dlamini, the South African ambassador to Argentina, flew back to South Africa to be with her father.

Mandela has been in and out of hospitals in recent years. Each episode has sparked renewed concerns.

His history of lung problems dates to when he was a political prisoner on Robben Island during the apartheid era, and he has battled respiratory infections over the years.

He has not appeared in public since South Africa hosted the World Cup in 2010.

Last year, he spent the Christmas holidays undergoing treatment for a lung infection and gallstones, one of his longest hospital stays since his release from prison in 1990. 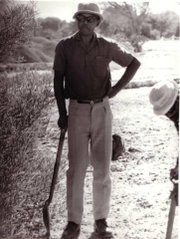