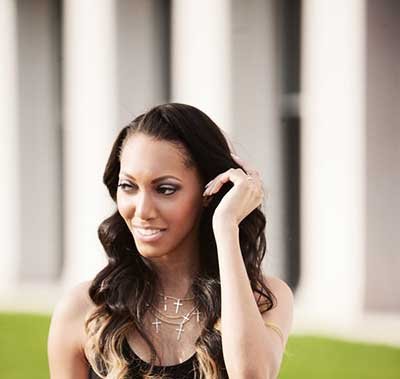 The wait is almost over, as Houston's own ElleGie (pronounced LG) gets ready to share her new look and sound with her loyal and eager fans. She'll share the stage with the region's hottest acts at the Springboard South Music Festival on Friday, June 21.

During her performance, the recording artist, model, and event host will reveal her new single, "What You Need" as she opens for rap legends, Paul Wall and Slim Thug on Friday. In addition to "What You Need," ElleGie will sing with rapper, "Blackcard Kidd" on a track about love titled "Down." ElleGie co-wrote some of her music with gifted collaborators such as songstress, Miss Myi. Miss Myi, and spiritual rhythm group, Soulfruit will also perform that evening.

ElleGie's new songs will follow other hits such as "Don't Stop" and "The Way You Are." She's excited to share her new sound with supporters. "We've all worked hard rehearsing and recording a sound that is sure to entertain," says ElleGie. "This would not be possible without all the great family, friends, and fans I've had in my corner."

ElleGie's Springboard performance coincides with the launch of her new website and branding. The branding follows ElleGie's recent "Logo Fight" campaign, where Twitter followers, Facebook fans, and other supporters chose between three logos designed by MWH Public Relations. The fans' decision will be revealed during the festival.

Recording artist Elle Gie has a following from Texas to California as well as a modeling career that reaches into the Midwest. The Houston based performer has taken her diverse style to the stages of stars such as Trey Songz, Young Jeezy and Paul Wall. Her music covers an entertaining spectrum of edgy, soulful, and high energy sounds that cannot be cornered into one genre alone. To learn more, visit http://ellegie.net/.