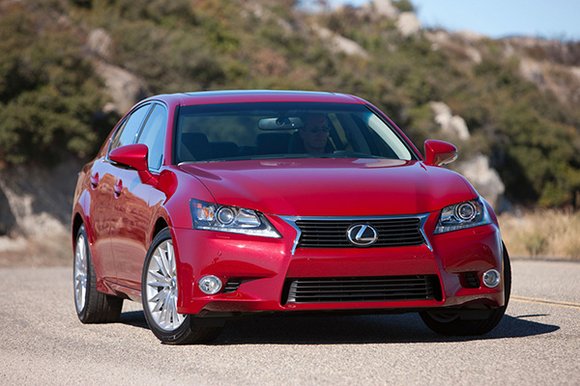 There was more to the 2013 Lexus GS 350 AWD than just the spindle grille that is the new face of the brand.

This all-wheel-drive sedan was smooth, quiet and relatively spacious for a midsize car; all attributes that are common to any Lexus. But the Lexus GS 350 was also fun to drive. That’s somewhat new for Lexus.

The car was powered by a 3.5-liter V6 that made 306 horsepower and 277 foot-pounds of torque. The engine combined direct fuel injection and port injection.

Though the combination of port and direct injection represented the latest generation of Lexus’ engine DNA, the rudiments for the powerplant came from the company’s parts bin.

However, platform technology for the car was new and it made a big difference in the driving dynamics of the GS 350 AWD. Power was put to all four wheels all the time with a rear-wheel-bias – 30 percent fore and 70 percent aft – all-wheel-drive system.

It had the capability of a 50-50 torque split but it could not send power side-to-side. That was one of several areas where the Lexus GS could stand a little refinement.

Still, the Lexus GS 350 AWD provided a great ride. There was even a little engine growl under assertive acceleration.

Handling was precise, passing on two–lane rural highways was quick and accurate. It didn’t take long for the GS 350 AWD to get out and then around slow moving vehicles and then back into the lane.

In other words, the suspension became much stiffer, the electronic power steering reacted quicker to driver input and the shift points were at even higher RPMs. The luxury package that accompanied the SPORT S+ mode was impressive.

Heated and cooled front seats were complimented by heated rear seats. There was a separate climate control for the rear and manually operated sun shade screens on the side rear windows and a power sun shade screen in the back.

Plush rear seats gave the rear seat area of the GS 350 the feel of a limousine from an equipment standpoint. Legroom was a little snug but there was plenty of headroom.

The front seat backs were powered into two places. The top third could be adjusted making the seat almost curve around the back. But while the head rests could be adjusted for height, the front pair could not be moved forward. That is another refinement the car needs.

Its new horizontal instrument layout afforded Lexus’ midsize sedan an air of substance. All the elements were solid. The huge 12-inch information screen embedded in the dash was housed in its own pod.

The climate controls and audio switches were compactly housed beneath the information screen. There was a mouse on the console and a menu button. The cursor appeared on the screen where control selection can be made in one of seven categories, each with its own subset of commands.

Touch on the mouse was very sensitive, a little more torque may have been better. What’s more, return to the home screen could only be done by using the curser. German luxury brands took a beating for the complexity as well as the driver distraction of their mouse control systems. But there have been very few complaints about the Lexus system.

Other than its spindle grille with its trapezoidal contours, the exterior design of the Lexus GS 350 AWD was evolutionary. Deep-set, high-tech headlamps with a projector beam design and L-shaped LED daytime running lamps as well as new taillights gave the car a new aggressive character.

The places where the car could be improved – headrests, mouse torque and return to homepage control – are minor fixes. The 2013 Lexus GS 350 AWD was a sound luxury performance sedan. As tested, the sticker on the car was $59,759.