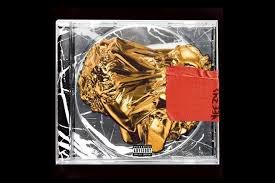 Kanye West is celebrating another milestone after the arrival of baby North.

The artist's latest effort, "Yeezus," has debuted at No. 1 on the Billboard 200 chart.

"Yeezus" is West's sixth No 1. record, and his sixth consecutive debut at the top, including his collaboration with Jay-Z, "Watch the Throne."

Yet on the sales end, "Yeezus" is also West's lowest selling album, moving 327,000 copies according to Nielsen Soundscan. Industry observers had loftier projections for "Yeezus," but the album also arrived without a single, and a bunch of trippy marketing campaigns.

It may not be the amount he's used to, but those first week sales numbers give "Yeezus" the biggest week for a rap album since Drake's 2011 offering, "Take Care." For 2013, the album is the third-largest debut, behind Justin Timberlake's "The 20/20 Experience" and Daft Punk's "Random Access Memories."