No claim of responsibility yet for Pakistan bombing that killed 45 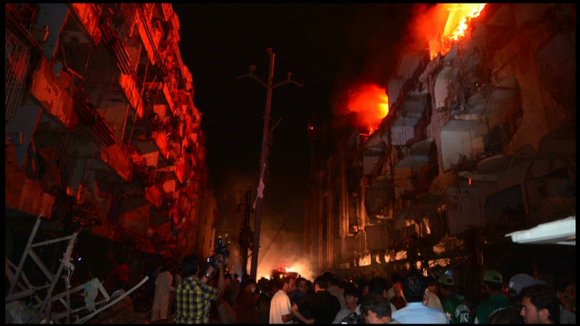 No group has stepped forward so far to claim responsibility for a massive car bombing in the southern Pakistani city of Karachi that killed at least 45 people over the weekend in what appeared to be the latest attack on the Shiite minority in the country.

The blast Sunday tore into nearby buildings, wounding about 150 people, and authorities warned that the death toll could rise as rescue workers continued to search for bodies amid the rubble.

Caused by a vehicle loaded with about 150 kilograms (330 lbs) of explosives set to a timer, the explosion took place in Abbas Town, an area of Karachi where many Shiite Muslims live, police said.

In recent months, a number of large-scale bomb attacks have targeted Shiites, who are overwhelmingly outnumbered by Sunni Muslims in Pakistan.

A huge bombing last month in a Shiite neighborhood in the city of Quetta killed about 90 people and fueled outrage about authorities' failure to stem the attacks, many of which were claimed by the Sunni militant group Lashkar-e-Jhangvi.

Pakistani security forces responded by carrying out raids in the area in which four militants were killed and others arrested. But Sunday's attack in Karachi suggested they hadn't done enough to dissuade further attacks.

Amnesty International says it has documented 92 separate attacks on Shiites across Pakistan since January 2012 that have resulted in the deaths of more than 500 people. It has criticized what it says is the lack of prosecutions of those responsible for the violence.

Although many of the recent attacks against Shiites in Pakistan have focused on the Hazara ethnic group in Quetta, sectarian violence has struck Karachi previously.

In February 2010, for instance, at least 18 people died in blasts that took place near a bus full of Shiite religious observers and in front of a hospital in the city.

And in late 2009, a suicide bomb attack on a Shiite procession moving through Karachi killed at least 40 people.