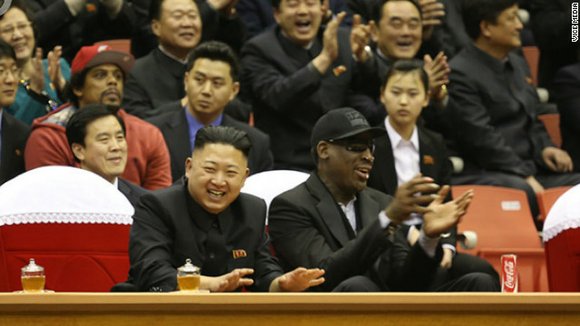 Never fear. While North Korea is a closed communist state, a rogue nuclear power that regularly threatens war and starves its own people in prison camps, Dennis Rodman has just returned from some one-on-one diplomacy with its "dear leader" Kim Jong Un and has good news to report: "I love him. The guy is awesome. He was so honest."

I'm going to go out on a limb and say this isn't going to look much better in the eyes of history than Charles Lindbergh vouching for Hitler's character in the late 1930s.

But say this for the retired rebounding champion known as "The Worm" -- he got closer to the young dictator by walking in the front door of North Korea with the Harlem Globetrotters and Vice magazine than diplomats and intelligence services have gotten to date. As former Assistant Secretary of State Stephen Ganyard told ABC News, "There is nobody at the CIA who could tell you more personally about Kim Jong Un than Dennis Rodman, and that in itself is scary."

Bonding over a shared love of basketball and getting drunk with the dictator's entourage sure sounds like a cozy way to visit a country where 3.5 million people have starved to death since 1995. But it requires a bit of willful ignorance to scoop up the state propaganda and be used as a dupe for their domestic state-run media, which is also likely to portray the diminutive dictator as an all-time dunking champ.

In a rambling interview on ABC News' "This Week," Rodman defended his trip and his budding friendship with Kim, telling George Stephanopoulos: "I don't condone what he does, but as far as a person to person, he's my friend" and then went on to the fetid well of moral equivalence to dismiss the prison camps and reports of mass murder as "just politics."

Rodman is far from the first celebrity to be used for publicity purposes to prop up a dictator and even profess real friendship.

Lindbergh cozied up to Adolf Hitler in a naive attempt to keep America isolationist in World War II. American singer, actor and attorney Paul Robeson was taken in by the Soviet Union and proclaimed its lack of segregation was evidence of freedom's progress while millions were being murdered by Joseph Stalin in gulags.

Nobel Prize-winning novelist Gabriel Garcia Marquez was proud of his personal friendship with Cuba's communist dictator Fidel Castro, propelled by long nights of drinking and philosophizing by the Caribbean Sea.

In more recent years, stars have taken big money from dictators in exchange for private concert performances, including Seal and Hilary Swank appearing at Chechen President Ramzan Kadyrov's multimillion dollar 35th birthday bash (Swank later apologized), Nelly Furtado performing for Moammar Gadhafi (she later gave the money back) and Mariah Carey, Usher and Beyonce performing for Gadhafi's sons in St. Barts. (My colleagues at The Daily Beast put together a useful gallery of these and other "stars who hang with dictators.")

The greed that simply compels one to take a gig, no matter who is paying the bill, is different than the impulse to ingest talking points and benefit from the privileges of friendship with mass murderers who can sometimes seem charmingly insane in person.

Just because you're crazy doesn't mean you're stupid and just because a man can be a monster in his vise-like grip on a state doesn't mean it should be a compelling revelation that he is also in fact human.

As David Remnick detailed in his literary and journalistic portrait of the Soviet Union, "Lenin's Tomb," Stalin was a fan of American musicals and after one long day of purging his own ranks with arbitrary executions, he retired to watch a comedy called "Happy Guys."

This is where judgment and moral clarity come in handy -- two concepts rarely associated with Dennis Rodman. That's why George Stephanopoulos was right to hand him a copy of the Human Rights Watch report on North Korea after Rodman declared his intention to return to North Korea for another visit sometime soon.

Vacationing in dictatorships is always a bad idea, even if it is justified by the self-serving notion of conducting personal diplomacy. It is still, as the Sex Pistols once said, "a cheap holiday in other people's misery."