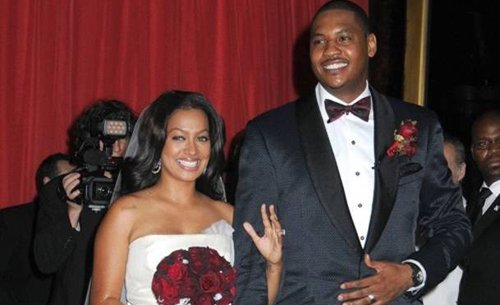 Aww c’mon Boston! You’re so much better than that! Apparently, during game six, of the Celtics/Knicks NBA championship playoff game, upon Knicks small forward Carmelo Anthony sitting down on the bench, the crowd in the Boston Garden suddenly erupted into a chant of “Honey Nut Cheerio’s” in an effort to taunt him and his wife La La Anthony of MTV and VH1 fame.

Why would that be considered a put down? Because Boston Celtic Kevin Garnett and Melo were involved in a very cantankerous match up a few months back while playing at New York City’s Madison Square Garden. During the game the two were jawing and wolfing at one another (Talking a whole lot of garbage or trash talking) and they truly seemed to get under one another’s skin. Well allegedly, during one of those skirmishes between the two players, it was rumored that Kevin Garnett said to Anthony that his wife “tasted like Honey Nut Cheerio’s”

Check out game footage of the two going back and forth!

It wouldn’t have been out of the norm for KG to say that to Melo, as Garnett is known for trash talking his opponents. He finds their weaknesses according to what is going on in their personal lives and uses it to get his opponent off his game. He was even rumored to have allegedly said “Happy Mother’s Day” to San Antonio Spurs big man Tim Duncan knowing full well that Duncan’s mother had succumbed to cancer! So it was believable that he could have said this Cheerio’s thing to Anthony.

Whatever he said it had Melo far passed mad! Check out what happened after the game was over!

After a few months passed La La Anthony, came out and denied that KG ever made the comment to her husband about her.

“I had to be able to laugh about it because that one was really crazy. Like someone saying, ‘Oh, your wife tastes like Honey Nut Cheerios,’ and everybody really believing that and running with it. That’s not what was said. Kevin Garnett did not say that about me. He just said some things to my husband that [Melo] didn’t like that he felt like one man doesn’t say to another. They’re perfectly fine now, it happens in the heat of battle. People don’t know what goes on on that floor. [Garnett's] known for that. So it got under my husband’s skin, things happen, but it wasn’t about me.”

Well, we don’t know what happened exactly, but clearly something was said, and true or not true, it has become something fans will now use to throw Melo off his game! So regardless of if KG said it or not, Boston Celtic fans did!