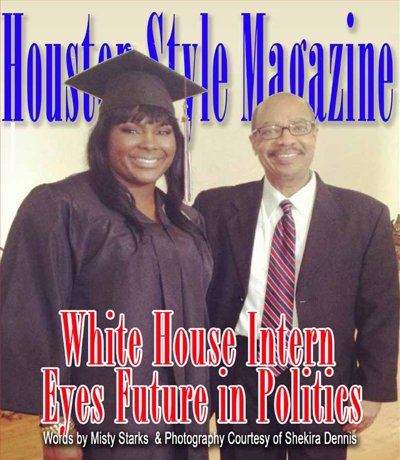 Women are making strides in business, politics and education like never before. They’re being encouraged to take charge and lean in. And right behind the Hillary Clintons, Marissa Mayers and Sheryl Sandbergs of the world is a crop of young leaders poised to push the newest installment of the women’s movement forward. Such is the ambition of Houstonian Shekira Dennis.

At just 24 years old, Dennis is already making her mark as a leader headed for the national stage. Last year, she was selected for a fellowship with President Barack Obama’s re-election campaign, where she spent the summer mobilizing young voters in economically disadvantaged areas in Charlotte, North Carolina. This year, she served as a White House intern for a semester, working in the Office of Presidential Personnel.

Dennis says her time at the White House and in Obama’s campaign gave her a broader view of the inner workings of the political system. She recalls meeting the president and his inspiring words to her.

“He was calm and engaging as we discussed my future aspirations,” Dennis says. “He encouraged me to stay the path, and in moments when I find myself being discouraged, to always ask myself, why am I choosing to serve? It was truly great to have that affirmation from President Obama and to see and feel in our interaction that he genuinely cared about my future endeavors.”

Dennis takes the president’s words to heart, particularly because she knows all too well how quickly adversity can jeopardize one’s aspirations. Growing up in the Sunnyside area of Houston, she did not have a traditional upbringing. Her parents were absent for much of her formative years, so her aunt took on the responsibility of raising her. With a loving grandmother to fill in the gaps, Dennis was encouraged to develop her gifts and talents. Still, there were hardships that threatened to derail her promising future.“ I had to balance a lot of unfortunate circumstances at a very young age, which has truly molded me and equipped me with a relentless fighting spirit,” Dennis says. “There are some days when I look back and think about how I could have not made it through certain barriers.”

After losing both her aunt and grandmother, Dennis focused her attention on school and community service. As a political science and journalism student at Texas Southern University, she was elected president of the Student Government Association (SGA). During her matriculation, she organized the Trayvon Martin Rally for Peace event, which mobilized local politicians, community leaders and students to protest the fatal shooting of the unarmed African-American teen at the hands of neighborhood watch volunteer. Dennis is also credited with strengthening relationships between the SGA and the community at-large and championing student issues before graduating in 2012.

According to American University’s Women and Politics Institute, more women are turning away from politics, but Dennis runs toward it because she understands its power. She plans to stay involved in the political process by opening her own campaign consulting firm one day. For now though, she’s weighing job prospects from advocacy groups in Washington, D.C.

“I’m probably one of those rare people who still believes in the process,” she says. “I understand that it needs to be refined; it’s not perfect. In some respects, it has not been set up to help the people, and if we want to see results we have to master the process and put the right people in the right places.”