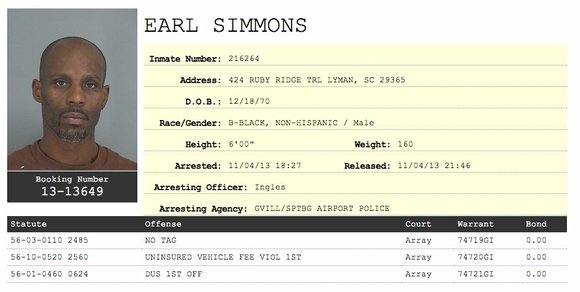 Rapper DMX - real name Earl Simmons - was arrested in South Carolina for the third time on Monday, November 4, 2013. The rapper spent three hours in jail before posting bond on charges of driving with a suspended license, having no car tag or insurance, according to the Spartanburg County Detention Center website.

DMX won't sit down with Wendy Williams to talk about his legal troubles this week because of the rapper's arrest Monday, his spokesman said.

"DMX, you are loved, but if you're not here by Friday, we've got to move on with our plans," Williams said on her show Tuesday, hours after the rapper was arrested on charges of driving with a suspended license and having no car tag or insurance.

The rapper, whose real name is Earl Simmons, has been arrested several times in his home state of South Carolina in recent months. He had been booked to appear on "The Wendy Williams Show" in New York on Wednesday, but he's decided to stay at home "due to recent media scrutiny," representative Domenick Nati said.

"The team apologizes to his fans who were anticipating his performance, but we are holding off on interviews and focusing on making music and organizing a world tour," Nati said.

Williams talked about his troubles on her show Tuesday. "This is not this man's fault. This man needs help, and that's why I just wanted to have a conversation with him. I wasn't trying to fix him."

DMX was pulling up to the Greenville-Spartanburg International Airport on Monday evening to catch a flight to New York when he was stopped. An airport police officer recognized him and realized he had recently been arrested for driving without a license, an airport spokeswoman said. He spent three hours in jail Monday night before posting bond, according to the Spartanburg County Detention Center website.

"The problem is that with all the people he knows, and the drivers that he has access to, he decided to drive himself to the airport," Williams said. "Well, there's nothing wrong with that. We all like to drive. At least, I like to drive. The problem is I have a driver's license and plates on my car."

The plan had been for DMX to talk most of the hour with Williams before performing his 1997 hit "Party Up (Up in Here)" with Swizz Beatz, she said. "Y'all gonna make me lose my mind -- that song," she said.

"Oh, DMX -- a mess," Williams said at the conclusion of her comments.

The run-in with the law Monday was his third in his home state in recent months, which included a citation for marijuana possession in Greer, South Carolina, in August. He was arrested then when an officer recognized Simmons and knew there was an outstanding warrant for his arrest for failure to appear in court for a previous charge, according to the arrest report.

Simmons allegedly "became very aggressive with his words and was making multiple idle threats" when the officer questioned him about "a bag of green plant material I knew to be marijuana" near where he was sitting in a pickup truck, the report said.

He was also arrested in Greenville, South Carolina, on July 26 on charges of driving under the influence, driving without a license and driving without a seat belt, police said. A state trooper stopped his 1978 Plymouth station wagon after he was allegedly "traveling erratically," the South Carolina Highway Patrol said. DMX was given a field sobriety test and failed, the agency said.

DMX has faced various criminal charges in the past, including probation violation, illegal drug possession and animal cruelty.

Maricopa County, Arizona, authorities said he was arrested five times after August 2007. That included a May 2008 arrest on drug and animal cruelty charges, when Simmons attempted to barricade himself inside his Cave Creek home, sheriff's deputies said.

Simmons also ran into trouble while in prison, being placed on "lockdown status" and forced to eat only bread and water for "jailhouse infractions." In February 2009, he threw a food tray in anger at a corrections officer, according to the sheriff's office.

In 2010 he was sent to prison after violating his probation. Four days later, DMX was admitted to the Flamenco Mental Health unit for an undisclosed disorder.

But before the litany of arrests, DMX had a promising music and movie career. He had a huge hit with "Party Up (Up in Here)" more than a decade ago, and he also appeared in movies, such as "Romeo Must Die."