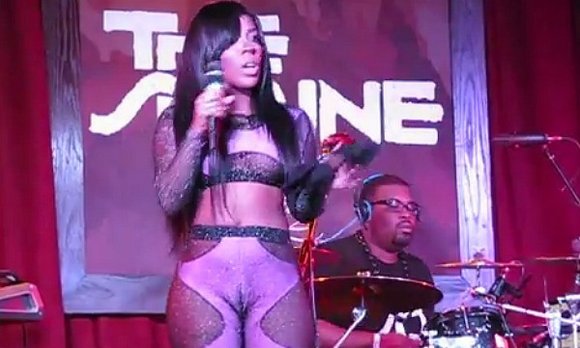 Singer K.Michelle sends social media into fits on a regular basis with her titillating Instagram photos, but an outfit she wore during a recent show in Chicago had some fans thinking Christmas came early.

While strutting through a rendition of her hit “V.S.O.P.” at The Shrine, Michelle’s cutaway catsuit created an optical illusion under the lights giving some the impression that the voluptuous singer was on stage half nude. The reality is that she was quite clothed, but the outfit was very formfitting and gave an outline of her secret garden that had Adams and Eves thinking they’d found the Holy Grail. 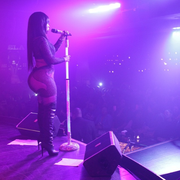 When word spread of the image K. Michelle took to her Twitter account to blast the misinterpretation of what she was wearing.

“Y’all tweeting about a photo shopped picture of my hot pocket. U broke bums should ask somebody to photo shop your pockets 2make them fatter,” the “Rebellious Soul” singer wrote (via Twitter) after she became a trending topic late Saturday night. “We crave a different kind of buzz.”

Y'all tweeting about a photo shopped picture of my hot pocket. U broke bums should ask somebody to photo shop your pockets 2make them fatter

While we’re not sure the image was manipulated via Photoshop, it was certainly misrepresented in some places as her being nude on stage, when she was not. Watch the video of the performance below where it’s pretty clear that she is dressed, but blessed.