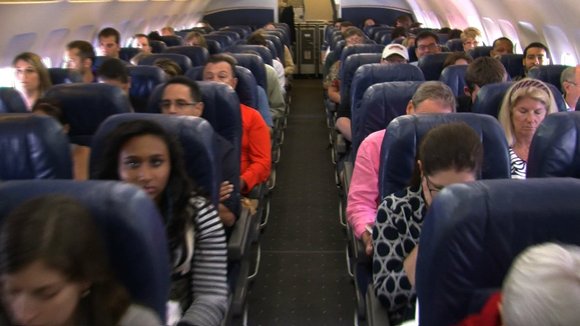 This month, a government industry group studying the safety of personal electronic devices on planes will deliver its findings and recommendations to the Federal Aviation Administration. The report may lead to looser rules on e-readers and similar devices on planes.

Want to read that e-book or play Candy Crush while taxiing to the runway?

Add Southwest Airlines to the list of U.S. airlines that have received Federal Aviation Administration approval to allow passengers to use many portable electronic devices in all phases of flight.

Southwest Airlines' move Wednesday came three weeks after the FAA announced the loosening of electronics rules aboard aircraft. Under the new rules, passengers may use certain electronic devices in "airplane mode" during taxiing, takeoff and landing. Each airline has to prove to the FAA that devices are safe to use in airplane mode on its aircraft.

Other airlines are moving to get FAA approval to allow greater electronic use. Virgin America said it hopes to allow devices in all phases of flight this month.

"We're in the process of applying through the new process and hope to implement the changes as soon as possible, with the goal of having the change live in November -- in time for the holidays," Virgin America spokeswoman Abby Lunardini wrote in an e-mail.

Spirit Airlines was less specific about its time frame. "We are in the process of coordinating with the FAA. I don't have a specific implementation date at this time," Spirit spokeswoman Misty Pinson wrote in an e-mail.

With such a new policy, some confusion exists about what's still permitted on board. US Airways reminded passengers of some restrictions that remain in place.

The airline noted that the eased restrictions apply only to domestic flights flown by its "mainline" aircraft, which means partner airline flights (such as US Airways Express flights) are not included. Those airlines have to get their own FAA approval.

Smartphones and other devices must be operated in airplane mode or with cellular services disabled.

The new expanded use of electronics does not apply to making or taking calls, which are still prohibited in flight. Phone calls are not allowed after the main cabin door is closed or before a crew member makes an announcement allowing calls upon arrival, US Airways said.

Customers should not use their devices during safety announcements. For takeoff and landing, laptops and other electronic devices that weigh more than 2 pounds must be secured in an overhead bin or under the seat in front of passengers.

Some folks had a sense of humor about the device debate.

On Tuesday, @RealMediaMedusa tweeted that "Portable Electronics on Airplanes policy too late for Alec Baldwin," referring to the 2011 incident in which the actor refused to turn off his electronic device at the gate and got booted from a flight.