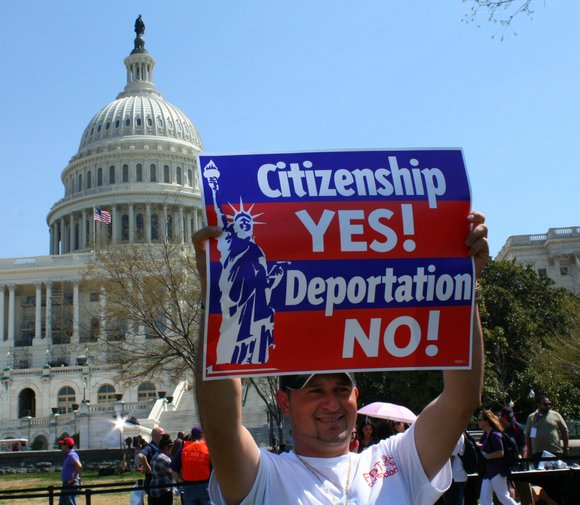 Thousands of community, labor and immigrant rights supporters and immigrant families converge on the West Lawn of the U.S. Capitol on April 10, 2013. The demonstrators urge Congress to pass common sense immigration reform in 2013 that includes a clear and direct path to citizenship for the nation's 11 million undocumented immigrants.

Even as Capitol Hill remained consumed by the government shutdown, House Democrats hoping to jump start the stalled debate over immigration reform put a new proposal on the table Wednesday.

"The American people have spoken," said Rep. Joe Garcia, D-Florida. "They want Congress to take on this issue."

Rep. Xavier Becerra, D-California, said he has no doubt there are enough House votes to pass a bill that "fixes our broken immigration system, including provide a path to legal residency and ultimately to citizenship to millions of people who work hard everyday in this country."

Sound familiar? It should.

In many ways, the Democrats say the bill they're introducing is similar to the immigration reform measure passed by the Senate in June.

But there's at least one key difference: this version doesn't include the plan to build more border fencing and step up security with thousands more border patrol agents.

"We are not introducing the perfect bill. But we are introducing a comprehensive reform bill that provides that space for compromise that takes the very hard and tough work that was done in the Senate and takes the very detailed and specific work that was done in the House and so, we put them both together," Garcia said. "And we have taken out the very controversial Corker-Hoeven (border security amendment), which I think everyone understood has opposition not only in elements in the Democratic Party but very strong opposition of members of the House."

The proposed House bill doesn't have any Republican backers who've signed on yet.

Still, Rep. Nancy Pelosi, Democratic minority leader, described the bill as "100% bipartisan" because it combines measures that have gotten support on both sides of the aisle in the House and the Senate.

But it's uncertain whether the measure will ever be up for debate on the House floor, since Republican House Speaker John Boehner is the one who would need to schedule a vote on the matter -- something he hasn't done yet.