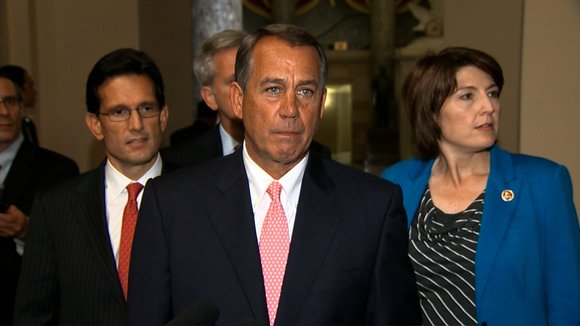 Speaking six days into a partial government shutdown and 11 days before the Treasury Department expects to hit its statutory debt ceiling, Boehner told ABC's "This Week" that he wants "a serious conversation" about spending, but no tax increases. Asked if the United States would default on debt payments unless President Barack Obama makes concessions, Boehner said, "That's the path we're on."

"The votes are not in the House to pass a clean debt limit" -- one with no conditions attached -- "and the president is risking default by not having a conversation with us," said Boehner, R-Ohio.

But speaking on CNN's State of the Union, Treasury Secretary Jack Lew said Congress is "playing with fire" by threatening to leave the U.S. government unable to pay its creditors -- a risk he called "unthinkable."

"We've never gotten to the point where the United States government has operated without the ability to borrow," Lew said. "It's very dangerous. It's reckless, because the reality is, there are no good choices if we run out of borrowing capacity and we run out of cash."

Lew said the government has been managing to make payments since May by shifting money around, but it will run out of those options on October 17. Unless Congress votes to raise the debt ceiling, the federal government will be left with "a very, very short window of time" before it would have to stop cutting checks for Social Security recipients or disabled veterans and would undermine the full faith and credit of the U.S. government, he said.

In the 2011 debt-ceiling standoff, Congress and the administration agreed to $2 trillion in across-the-board spending cuts over a decade. Though default was narrowly averted, the crisis spurred one of the top three bond-rating houses, Standard and Poor's, to cut the U.S. credit rating for the first time.

Government offices across the country shut down Tuesday after Republicans in the House held up the passage of a temporary spending bill, demanding changes or delays to Obama's signature health care law. More than 800,000 federal workers have been on unpaid leave since then.

A CBS poll released last week shows a 72% majority of Americans disapprove of the government shutdown, with more Americans blaming GOP lawmakers than Obama. But Boehner told ABC he doesn't have the votes to end the standoff without the Republican conditions on the Affordable Care Act, widely nicknamed "Obamacare."

"I have 233 Republicans in the House, and you've never seen a more dedicated group of people who are thoroughly concerned about the future of our country," he said. "They believe that Obamacare, all these regulations coming out of the administration, are threatening the future for our kids and our grandkids. It is time for us to stand and fight."