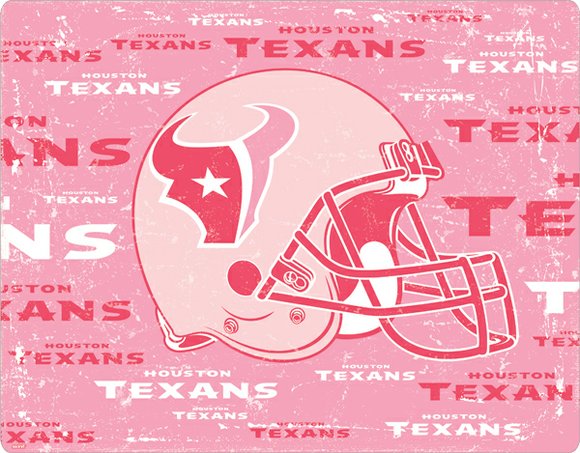 October is national Breast Cancer Awareness Month, and the Houston Texans and the National Football League are once again doing their part to promote the cause through the League’s month-long “A Crucial Catch” campaign. In what has become an NFL tradition, players and coaches across the League will wear pink shoes, gloves and apparel in games throughout the month to show their support.

Game-worn pink merchandise and footballs will be autographed post-game and auctioned online at www.nfl.com/auction. All NFL Auction proceeds from the sale of breast cancer awareness items during the month of October will benefit the American Cancer Society. Special pink merchandise will also be available in the Go Texan Store and online at www.NFLShop.com, www.nike.com and www.neweracap.com, with a portion of proceeds going to breast cancer charities.

The theme for Sunday’s game against St. Louis is Pink Ribbon Day presented by Kroger. Each fan will be given a pink card upon entering the stadium and will have the opportunity to recognize a friend or loved one who has been touched by cancer by writing their name on the card proudly waving it during the second quarter “Stand Against Cancer Fan-Cam” moment. Texans Ambassador, Steve McKinney and his grandmother, a proud breast cancer survivor, will join Kroger representatives to kick off the “Stand Against Cancer Fan-Cam.” Additionally, members of Zeta Tau Alpha will be passing out pink ribbon pins to fans entering the stadium.

Fans wishing to join the Texans in supporting the Susan G. Komen Foundation may do so by donating online via HoustonTexans.com, with 100 percent of the contributions going to the Komen Foundation. Every fan who donates at least $10 will be entered into a drawing to win two tickets to the Oct. 13 game against St. Louis. Online donations will be accepted until Friday, Oct. 11 at noon CDT.

The Houston Texans Foundation will show its support by donating all of the proceeds from the sales of pink memorabilia at the Oct. 13 Game Day Auction to the Susan G. Komen Foundation. Auction items will include player-autographed pink cleats, gloves, and other Texans memorabilia.

Prior to kickoff of the Texans’ game against the Rams on Oct. 13, Rossalyn Jackson, mother of Texans starting CB Kareem Jackson, will serve as the Homefield Advantage Captain. Mrs. Jackson has battled breast cancer twice and is currently in remission. She will have the opportunity to come out of the tunnel with her son and cheer the Texans on during player introductions. Janice McNair, the “First Lady of the Texans,” will serve as the team’s Coin Toss Captain. Mrs. McNair is also a breast cancer survivor.

Nancy Curtis, a native Houstonian and acclaimed opera singer, will perform the national anthem. Twenty-five breast cancer survivors and their caregivers will be recognized on the field during the national anthem, as they stand behind Mrs. Curtis while she performs. Season ticket holders who have a connection to cancer will hold the Texas flag during pregame festivities.

On Oct.1, Texans Cheerleaders, Kroger and Houston Methodist Hospital teamed up to reward six breast cancer survivors with the ultimate shopping spree in a local Kroger. The Texans were also strong supporters of the annual Susan G. Komen Race for the Cure, which took place Saturday, Oct. 5. More than 350 Texans fans and members of the Texans organization participated in the race, including Texans Cheerleaders, staff, and members of the Lady Texans – the wives of Texans players, coaches and executives.