Flesh-eating 'zombie' drug 'kills you from the inside out' 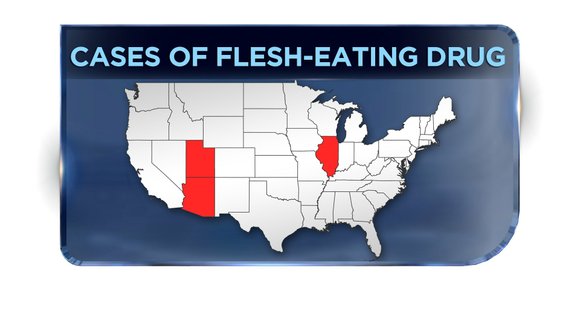 A flesh-eating drug that turns people into zombie-like creatures seems to have made its way to the United States.

(CNN) -- A flesh-eating drug that turns people into zombie-like creatures seems to have made its way to the United States.

This extremely addictive injectable opioid is called krokodil (pronounced like crocodile) or desomorphine. It's so named in part because users report black or green scaly skin as a side effect.

This weekend five people were hospitalized in the Chicago suburb of Joliet, Illinois, with symptoms similar to cases reported recently in Utah, Arizona and Oklahoma.

Dr. Abhin Singla said he suspects a woman he treated this weekend was suffering from krokodil addiction. Singla is an internist and addiction specialist at Joliet's Presence St. Joseph Medical Center. The patient lost significant portions of her legs, he said.

"It's a zombie drug -- it literally kills you from the inside out," Singla said. "If you want way to die, this is a way to die."

Krokodil causes serious damage to the veins and soft tissue infections, rapidly followed by gangrene and necrosis, according to a 2013 study (PDF).

The soft tissue damage happens around the injection site. The drug also seems to clump in the veins as it fails to dissolve completely in the blood. The clumps make their way to distant places in the body and start to damage tissue, said Dr. Robert Geller, medical director of the Georgia Poison Center.

Geller said he hopes the drug "doesn't show its ugly face" in Georgia but said doctors across the country are aware of the drug.

So far there are no officially confirmed American cases of krokodil abuse. To have official confirmation, the Drug Enforcement Agency would need to have a sample of the drug that caused the problem.

A DEA fact sheet about the drug released this month said the National Forensic Laboratory Information System, the DEA database that collects scientifically verified data on drug items and cases, identified two exhibits submitted to these labs as desomorphine in 2004 but none since then.

"It's not clear how widely used it is in the U.S.," Geller said. "Officials in Oklahoma, where it was reportedly seen, say they cannot confirm or deny it."

"The doctors say it ate him from the inside out," Chelle Fancher told the TV station. "It wasn't until the next day that they told us that it was krokodil."

There have been many confirmed cases of krokodil abuse in Russia and Ukraine.

An estimated 100,000 in Russia and around 20,000 people in Ukraine are estimated to have injected the drug in 2011, according to a study that ran in the International Journal of Drug Policy this year. Experts theorize the drug first spread across Russia and Ukraine when heroin became less available.

Krokodil is cheaper than heroin and can be easily cooked up in someone's home much like meth.

People making krokodil combine the painkiller codeine with easily available chemicals. They can use iodine; strong alkalies such as Mr. Muscle, a kitchen and bathroom cleaner; hydrochloric acid; red phosphorous from matches; and/or organic solvents such as gasoline or paint thinner.