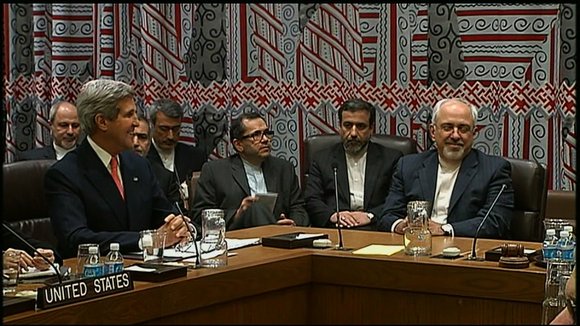 US Secretary of State John Kerry Thursday, September 26, 2013, entered a meeting with an Iranian delegation that included Foreign Minister Mohammad Javad Zarif. The meeting marked the highest level contacts between the US and Iran since 1979.

By Laura Smith-Spark and Jim Sciutto

US Secretary of State John Kerry Thursday, September 26, 2013, entered a meeting with an Iranian delegation that included Foreign Minister Mohammad Javad Zarif. The meeting marked the highest level contacts between the US and Iran since 1979.

Talks between Iran and six world powers over Tehran's nuclear ambitions ended Wednesday on a promising note when they released a joint statement for the first time, suggesting Iranian officials appear willing to negotiate.

The meeting in Geneva ended with both sides issuing a joint statement that described the talks as "substantive and forward-looking."

The tone of the negotiations appeared to signal a shift, a departure from the diplomatic standoff that prevailed under former Iranian President Mahmoud Ahmadinejad.

The latest discussions centered on a proposal put forth by Iran, which wants the six powers to recognize what it says is the peaceful nature of its nuclear energy pursuits.

Details, however, were scarce.

"We will be doing the negotiation in the negotiating room and not in the press," Iranian Foreign Minister Javad Zarif told reporters after the talks concluded.

The talks were scheduled to resume November 7 and 8.

"The Iranian proposal was a new proposal with a level of seriousness and substance that we had not seen before," White House spokesman Jay Carney told reporters.

Differences remain between Iran and the six countries.

"No one should expect a breakthrough overnight," Carney said. "And these are complicated issues. They're technical issues. And as the President has said, the history of mistrust is very deep.

"The onus remains on Iran to come into compliance with its international obligations. And any deal must prove to the international community that Iran's program will be used for exclusively peaceful purposes," he said.

The two-day talks brought together Iran's representatives and those from the so-called P5+1 -- the United States, Russia, China, France and Britain, all countries with permanent seats on the U.N. Security Council, plus Germany.

European Union foreign policy chief Catherine Ashton, who is leading the talks for the P5+1 bloc, called it a "very intensive and very important meeting."

She also declined to offer specifics but said they were the most detailed to date.

The joint statement built on a cautious optimism that was expressed after the first day of the talks.

Zarif, who is leading the Iranian delegation, said in a Facebook post Wednesday that their proposal outlined "a new view which emphasizes the need for pursuing a common goal by all players" and identified areas that must be agreed upon.

'Ball is in Iran's court'

Many in the West fear Iran is pursuing the development of a nuclear bomb, but Iran -- slapped with sanctions because of its program -- has always maintained that it is developing nuclear energy capabilities for peaceful purposes only.

Ashton's spokesman, Michael Mann, said Tuesday that the mood was one of "cautious optimism" but that the "ball is in Iran's court" to respond to the bloc's concerns.