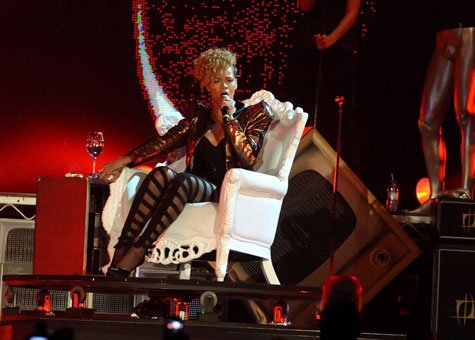 Pop princess Rihanna sells albums for her sultry, attention-grabbing poses. But during a visit to the United Arab Emirates, her poses got her into hot water.

While in town for a concert, the singer visited the courtyard of the Sheikh Zayed Grand Mosque Center. The landmark mosque said it asked her to leave after she posed for photos inappropriately on its grounds.

A covered-up Rihanna was decked out in a dark outfit, complete with what looked like the head gear worn by Muslim women. She posed in bright red lipstick and posted the pictures on her Instagram account.

In one photo, she's lying on her back. She captioned it "no tan lines."

In another shot, her arms are akimbo as she glances over her shoulder.

"She was asked to leave before entering the actual mosque, (she was in the courtyard taking pictures) after taking some photos that did not fit within the rules and regulations set out to preserve the sacredness of the center," the mosque said in a statement.

The singer did not immediately respond to the controversy about her photos. She was in town for a concert Saturday night.