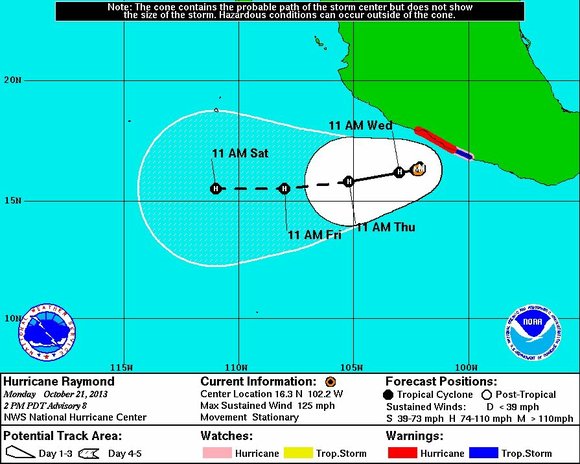 At 5 p.m. Monday ET, Raymond was a Category 3 storm -- a major hurricane -- with top winds of 125 mph (196 kph). Its eye was centered about 160 miles (225 kilometers) west-southwest of Acapulco, the U.S.-based National Hurricane Center reported.

But its worst punch remained far offshore, since hurricane-force winds extended just 25 miles from the eye. The storm had been sitting still since Monday morning, and its movement over the next day was expected to be "slow and erratic," forecasters said.

The hurricane center predicts Raymond will blow out into the Pacific Ocean, but could move closer to the Mexican coast before making that move. It is forecast to dump 2 to 4 inches of rain on the coast, and there may be areas in Michoacan and Guerrero states that receive as much as 8 inches.

"A storm surge is expected to produce significant coastal flooding in areas of onshore flow within the warning areas," forecasters reported. "Near the coast, the surge will be accompanied by large and destructive waves."

A hurricane warning was posted for about 140 miles of coast, from the city of Lazaro Cardenas to Tecpan de Galeana, about 65 miles north of Acapulco. The warning means winds of 74 mph or higher are expected in the next 36 hours.

A hurricane watch and tropical storm warning was posted from Acapulco to Tecpan de Galeana, meaning hurricane conditions are possible within two days, and winds of 39 mph or higher are expected within 36 hours.

Raymond quickly strengthened overnight off the south-central coast, which was was hit hard by another storm in September. That storm, Manuel, triggered deadly mudslides and left about 40,000 tourists stranded in Acapulco, a popular tourist destination.

On the other side of the continent, meanwhile, the hurricane center announced Monday afternoon that a tropical depression in the Atlantic Ocean had become Tropical Storm Lorenzo. The storm was 635 miles east-southeast of Bermuda on Monday evening, moving into the deep Atlantic.

The storm had top winds of 40 mph, and it was moving north-northeast at 7 mph. Lorenzo was expected to start fading Wednesday without reaching hurricane strength, forecasters projected.