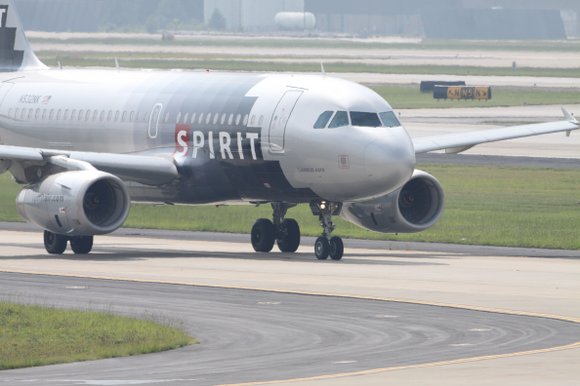 By Katia Hetter and Marlena Baldacci

Dozens of passengers slept at the airport, some waiting nearly 12 hours, until their aircraft were cleared for takeoff.

"According to the Broward County Sheriff's office there were several dozen people in Terminal 4 overnight," said airport spokesman Greg Meyer, via e-mail. "There were no arrests. Some did lose their tempers, but it was all worked out amicably."

This week's inspections followed last week's engine failure on a Spirit Airlines flight shortly after takeoff from Dallas/Fort Worth International Airport. Spirit Flight 165 was heading for Atlanta when the failure occurred, but returned safely to the Dallas airport.

Besides one flight cancellation, passengers on Atlantic City-bound Flight 268 may have experienced the worst delays. They waited nearly 12 hours to depart on a flight scheduled to take off Wednesday night at 8:15 p.m. They didn't leave until Thursday morning at 8:08 a.m., according to airport flight departure records. Denver-bound Flight 355 was scheduled to depart Wednesday night at 8:56 p.m., but didn't leave until more than 10 hours later, on Thursday morning at 7:29 a.m.

One angry passenger was Rafael Hernandez, who was trying to get home to Chicago. Hernandez told CNN affiliate CBS4 in Miami that authorities escorted him out of the terminal after he lost his temper. "It has been a disaster. I was so frustrated. I'm never ever going to fly Spirit again," he said.

"Following the engine failure on one of our aircraft last week, and after reviewing routine maintenance procedures, we are completing a proactive and voluntary check on our aircraft engines overnight as a precautionary measure," wrote Spirit spokeswoman Misty Pinson, in an e-mail to CNN.

The safety checks take about 45 minutes per aircraft, and were expected to be completed Thursday morning, she wrote.

"Some flights are experiencing significant delays as we complete the checks," wrote Pinson. "Each aircraft is being returned to service as soon as the check is completed. We apologize for these delays. We are working diligently to get our customers where they need to go as quickly as possible. ... As always, the safety of our customers is our number one priority."