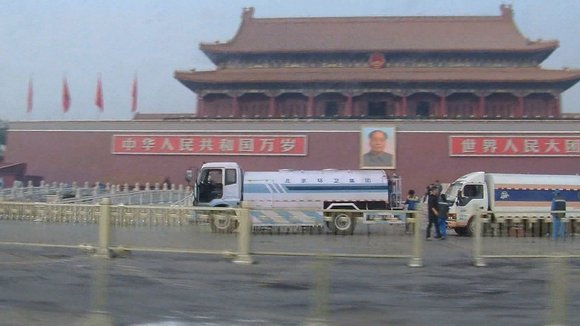 Five people are dead after a jeep plowed into a crowded part of Tiananmen Square and caught fire Monday, authorities said.

Five people are dead after a jeep plowed into a crowded part of Tiananmen Square and caught fire Monday, authorities said.

The crash temporarily blocked off a busy area in the heart of the Chinese capital as rescuers and police rushed to the scene.

Police said the crash happened around noon local time in front of the Tiananmen Rostrum, a structure that stands at the entrance to the Forbidden City bearing a giant portrait of Mao Zedong.

The vehicle hit the guardrail of the Jinshui Bridge over the moat of the Forbidden City before it burst into flames, the state-run news agency Xinhua reported.

The driver of the jeep and two passengers were killed, Beijing police said in a statement. The other two fatalities were tourists -- a Filipino woman and a Chinese man, according to state media reports. At least 38 people were injured, state media said. Eleven injured people, a mixture of tourists and police officers, have been taken to the hospital, Xinhua said.

Photographs circulating on social media showed a vehicle engulfed in flames in Tiananmen Square. CNN wasn't immediately able to verify the authenticity of the images.

Authorities moved quickly to tackle the blaze and clear up the scene. But the cause of the deadly crash remained unclear.

Around 2:30 p.m., authorities were barring tourists from entering the area in front of the Tiananmen Rostrum and the center of Tiananmen Square. Both areas are usually packed with mostly Chinese tourists.

Dozens of police vans, along with uniformed and plainclothes officers, were gathered at the site of the crash. Workers scrubbed the concrete, and there was no sign of the vehicle or any residue from the fire.

The Tiananmen East subway station and part of the Tiananmen West station were temporarily closed, the subway operator said. Roads in the area soon reopened, and traffic was flowing normally by midafternoon.

Tiananmen Square is China's most politically sensitive landmark as a result of the events of June 4, 1989, when government forces opened fire on civilians to quash pro-democracy demonstrations.

The square is often closed or put under heightened security before and during major events.

The previous noteworthy case of a vehicle catching fire in the area was in February 2009, when three people tried to set themselves on fire after police stopped them just east of the square.

Two of those three people, petitioners from out of town, were injured in that blaze.