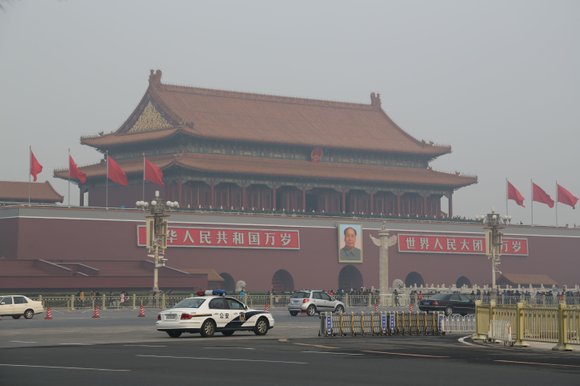 By Steven Jiang and Katie Hunt

Chinese authorities have made a concerted effort to censor images and online accounts of a jeep that plowed into crowds in Beijing's Tiananmen Square, killing five and injuring 38, amid suggestions police are looking for suspects from the restive western region of Xinjiang.

While the cause or motive for Monday's crash remains unclear, one manager at a five-star hotel in Beijing, who declined to be identified because of the sensitivity of the case, told CNN that the city's hotels had received a notice from local police requesting assistance in the investigation of a "major incident" late on Monday.

It listed four people with names that suggested they belonged to the Uighur ethnic group that comes from Xinjiang Province, where tensions between Han Chinese and the largely Muslim Uighurs have sometimes turned violent.

The notice also listed four vehicles -- including two cars and a motorcycle -- with license plate numbers from Xinjiang and asked hotels to keep a look out for suspicious guests that may have stayed in the capital from October 1.

Willy Lam, an adjunct professor at the Chinese University of Hong Kong's Center for China Studies, said the incident, taking place in China's most important and sensitive public space, would be considered a major loss of face for Beijing's leadership, especially if it turned out to be related to Uighur separatism.

"It was close to the Zhongnanhai party headquarters and, in terms of timing, it's on the eve of the plenary session of the Chinese Communist Party so they don't want these rumors and speculation," he said.

"According to eye witness reports I've read online, the jeep was driving at people. It appears to be a deliberate attempt to create havoc and a number of casualties," he said.

Earlier this month, Chinese police said they had arrested 139 people in Xinjiang for spreading religious extremism online. The arrests came in the wake of riots that left 35 people dead.

While a number of Chinese media outlets reported Monday's incident, their accounts stuck to the bare-bones details published by the official Xinhua news agency.

No footage was shown on CCTV, China's state broadcaster, and the images that appeared immediately after the incident on Weibo, China's version of Twitter, showing black smoke and a vehicle engulfed in flames, were largely deleted. Searches combining the words Tiananmen, terrorism and car crash were also blocked.

CNN broadcasts about the incident were blacked out inside China.

However, the English-language Global Times, which is state-run but not regarded as an official mouthpiece, reported that police were looking for two suspects from Xinjiang in connection with the jeep, which was described as light colored with Xinjiang plates.

Of the five people killed, three were the vehicle's driver and two passengers and the other two were tourists; a woman from the Philippines and a Chinese man.

Authorities moved quickly to tackle the blaze and clear up the scene on Monday. On Tuesday, the square was back to normal.