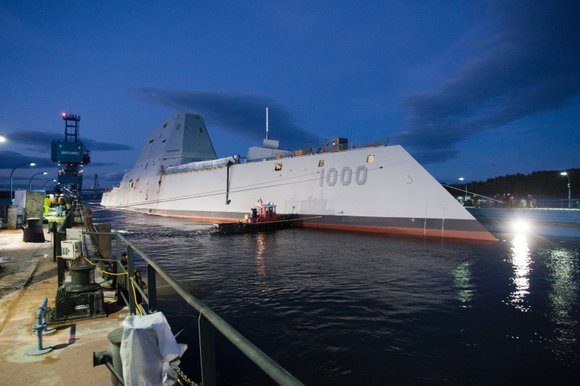 Hey Star Trek fans, how much do you know about Capt. James Kirk?

Were you aware that he was born in Bethesda, Maryland, and raised in Hershey, Pennsylvania? That he graduated from the U.S. Naval Academy?

We're talking about the real James Kirk, who, like the fictional Star Trek character James T. Kirk, commands a ship of the most cutting-edge technology.

Capt. James A. Kirk will be commander of the Navy's new USS Zumwalt, the first of the DDG-1000 class of destroyers. It is longer, faster and carries state-of-the-art weapons that will allow it to destroy targets at more than 60 miles away, according to the Navy.

Much of the ship's superstructure is wrapped in a huge canopy made of lightweight carbon fiber composite.

The Zumwalt can't travel into deep space like the Starship Enterprise, but it does have a feature that the fictional Capt. Kirk coveted. On the television series, the captain once stole a "cloaking device" from a Romulan ship that effectively made the Enterprise "disappear" from their enemies' eyes.

While the Zumwalt cannot completely disappear, its canopy and the rest of the ship is built on angles that help make it 50 times harder to spot on radar than an ordinary destroyer.

When its begins missions, the Zumwalt will be the largest stealth ship in the Navy.