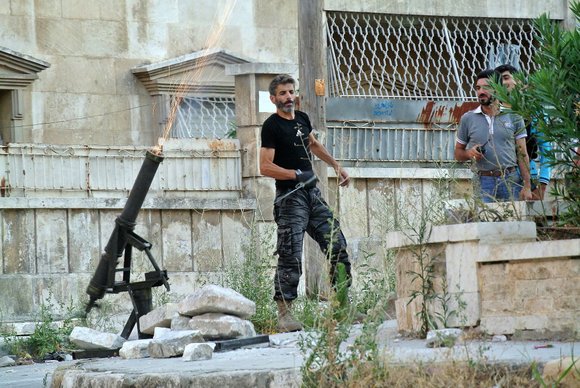 A mortar is launched in Aleppo. Syria Crisis: Ammar Abd Rabbo is a photographer that just returned from Aleppo. This was his third trip from Aleppo, Syria.

A U.N. report due Monday will say the perpetrators of last month's chemical weapons attack in Syria had up to 350 liters of sarin gas, a diplomatic source told CNN on Monday.

It will say surface-to-surface missiles were used and will give the trajectory of the missiles, the source said.

Some of the hardware used in the attack had Cyrillic lettering, the source said, citing the report.

While the U.N. investigation is not assigning blame for the attack, the source said the details in the report will serve as "signs of culpability."

Another diplomatic source also said the report will state that sarin gas was used.

That there was such an attack on August 21 is widely accepted as fact.

The United States, Britain, France, and NATO have said that the Syrian regime was behind the attack and that there's no sign rebels had access to such weapons.

Syria and its ally Russia have blamed rebels. But the U.N. finding that whoever was culpable had access to such large amounts of sarin could bolster the U.S. argument.

Even as the world awaited the report Monday, Russia openly bickered with the United States about an agreement reached over the weekend aimed at averting U.S. military action against the Syrian regime.

The next step in implementing the agreement is to get a U.N. resolution.

But on that front, Russian Foreign Minister Sergey Lavrov accused U.S. Secretary of State John Kerry "and his Western allies" Monday of misunderstanding the deal, according to Russia's state-run Itar-Tass news agency.

The deal does not say that a U.N. resolution will be under Chapter 7 of the U.N. Charter, Lavrov said.

Chapter 7 potentially authorizes the use of force.

Lavrov said comments by Kerry "show unwillingness to read the document" that Russia and the United States agreed to.

Kerry said Monday that a U.N. resolution will need to include the possibility of force. "If the Assad regime believes that this is not enforceable, then they will play games," he said.

The agreement states that if there is noncompliance "or any use of chemical weapons by anyone in Syria, the U.N. Security Council should impose measures under Chapter VII of the U.N. Charter."

It does not specifically state that the resolution being sought now will be under that chapter.

Russia, a Syrian ally, holds veto power on the council.

"A week ago, the Syrian regime did not admit that it even had chemical weapons," Kerry told reporters Monday. "Today, that regime has agreed, at least through the Russians ... to rid itself of those weapons."

But he also noted that "nothing can be accepted at face value."

According to the plan, Syria must submit a full list of its chemical weapons stockpile within a week. International inspectors must be on the ground in the country by November, and all production equipment must be destroyed by the end of November.

By the middle of next year, all chemical weapons material must be destroyed, according to the agreement.