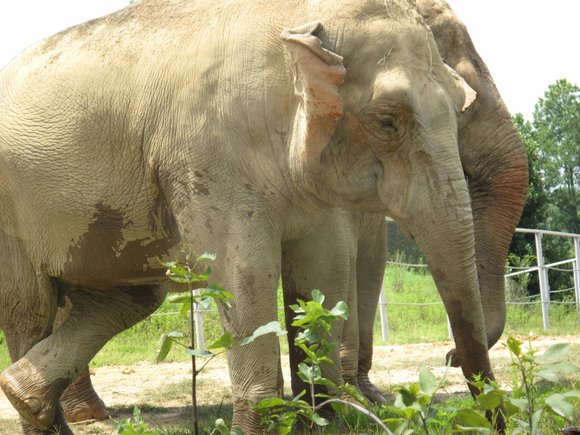 Elephants tramp through lush vegetation at the Elephant Sanctuary, a 2,700-acre refuge in rural Tennessee.

More than 2,000 elephants live in the Serengeti National Park in Tanzania.

More than 80 elephants in Zimbabwe have been poisoned with cyanide -- the latest victims of poachers keen to feed soaring global demand for illegally trafficked ivory.

Since May, the carcasses of 87 elephants have been discovered in Hwange National Park, said Caroline Washaya-Moyo, public relations manager for Zimbabwe's Parks and Wildlife Management Authority.

The poachers poisoned natural salt licks to bring down the mighty beasts, she said Wednesday.

The parks authority has so far recovered 51 tusks, she said -- leaving 123 in the hands of the poachers.

Zimbabwe's newly appointed Environment Minister Saviour Kasukuwere told CNN that he would push for stiffer jail penalties to root out poaching in the wildlife-rich African nation.

"That will be one of my missions in the new parliament, given the recent case of elephants which were poisoned by poachers," said Kasukuwere, who visited the park 10 days ago to see the impact of the poisoning.

Last month authorities arrested five suspected poachers after 41 elephants were found dead in the park, which is about 800 kilometers (500 miles) southwest of Harare, not far from Zimbabwe's border with Zambia. The other carcasses have been discovered since then, Washaya-Moyo said.

Three of those arrested have been convicted and are due to be sentenced this week, she said. Two investigations are ongoing.

The Zimbabwe Conservation Task Force, an anti-poaching organization, said the latest elephant deaths could have been avoided if Harare was tougher on those convicted of poaching.

"They need to be given some extensive jail time. If it was, they wouldn't carry on doing it," said the organization's chairman, Johnny Rodrigues.

He accused Zimbabwe of not doing enough to clamp down on poachers and of creating an impression that the country had more elephants than it can sustain.

"They want permission from CITES to sell the ivory they have in stock and they think they will get it if there are too many elephants here," Rodrigues said, referring to the Convention on International Trade in Endangered Species.

CITES, also known as the Washington Convention, aims to ensure that international trade in specimens of wild animals and plants is kept to a minimum to avoiding threatening their existence.

Rodrigues puts the country's elephant population at around 35,000, while Washaya-Moyo said it was about 45,000.

The use of cyanide could also have a wider impact, Rodrigues said. "When other animals and birds feed on the rotting elephant carcasses, they will also die from the poison. Hundreds of animals are now at risk," he said.

The police suspect there could be more elephant carcasses in the park that have not yet been discovered, he added.

The Parks and Wildlife Management Authority warned that wildlife poaching syndicates in Zimbabwe "have become sophisticated and need appropriate responses to effectively deal with them."

The International Fund for Animal Welfare and the WWF conservation group said that a recent surge in the illicit ivory trade has resulted in the killing of 30,000 African elephants annually in recent years.