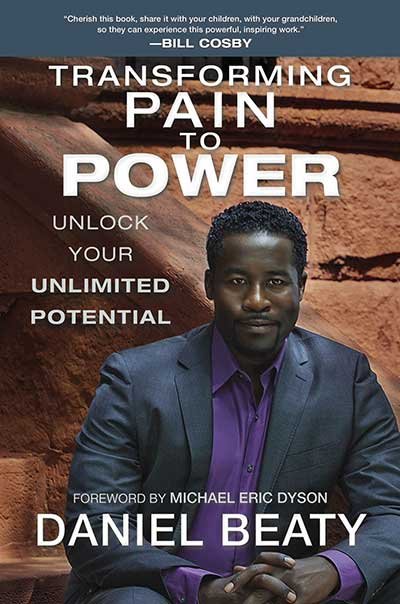 You’ll never amount to anything.

You might have had those words thrown at you at some point in your early life – and if they were directed at you, the memory still stings. There’s too much finality in them, too much lack of hope. The threat of becoming nothing feels like a death.

So if you heard those words – or something similar – how can you pull yourself out of their grip? Read “Transforming Pain to Power” by Daniel Beaty, and you might find some direction.

Having grown up in a household marred by addiction and incarceration, you might think that Daniel Beaty would’ve had a childhood lacking in dreams. That wasn’t the case, though, because of the kindness of a third-grade teacher who nurtured Beaty’s interest in public speaking.

Still, and despite that his talents blossomed into a multi-faceted career, Beaty continued to suffer pain because of a lack of relationship with his father. The bad times continued while he was in college, until he figured out a few things on the road to happiness and contentment.

The first thing he determined is that “No matter where you come from or where you are in this moment, you have within you the unlimited potential to create, do, or be anything.” Furthermore, you can choose “power over pain… joy over sorrow” and a “purposeful” life.

To do that, you need to find your “core Authentic Self,” which will tell you who you are. “The Authentic Self is the parent to our thoughts and feelings,” Beaty says. “By connecting with out Authentic Self we can embrace whatever label of identity we choose that empowers us to accomplish our greatest dreams.”

Next, identify your “INITIAL BREAKDOWN,” or the deepest, most primal hurt you’ve experienced. From there, you can hone in on a “RESULTING THOUGHT PATTERN,” which is a negative self-identifier.

Learn to embrace the pain and breathe through it. Understand that, while you should get rid of negativity, it’s “hard to not do something.” Identify your “Emotional Inheritance,” things your parents said that may or may not be true. Don’t wallow in sorrow for “a season.” And “remember to Breathe, to Observe, to Choose, to be Intentional, to Create.”

No doubt about it, “Transforming Pain to Power” is an odd little book.

Not only is it repetitious, but author Daniel Beaty filled it with poetry, excerpts from his plays, letters from his father, and quotations in between the nitty-gritty of his subject. There’s psychology in here; some of it’s actually real, and some of it’s fabricated from his ideas and experiences. Because of all this, I often had a hard time staying focused on this book and Beaty’s line of thought, mostly because it seemed to go in squares and circles.

I do believe there’s some basic good inside this book – affirmations, self-appreciating thoughts, and ideas for coping - but it’s going to take extreme patience to find what you might need. Overall, you can try “Transforming Pain to Power,” but reading it might amount to a lot of frustration.