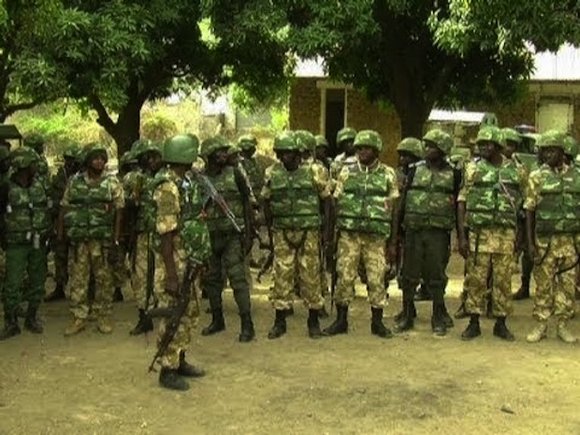 Vigilantes and volunteers aided in the search near the northeastern town of Chibok, where heavily armed men descended on the Government Secondary School Monday night as the girls slept in their dormitories. After a long gun battle with soldiers guarding the school, the militants herded the girls onto buses, vans and trucks and drove off, flanked by motorcycles.

"They took away my daughter and my niece... and we fear for their safety in the hands of these merciless people that take delight in killing and destruction," said the mother of one of the abducted girls. "I don't know what to do. The whole family is confused and we have turned to prayers which is all we have."

The rescue teams, aided by surveillance helicopters, were moving deeper into the vast forest that extends into neighboring Cameroon and other states in the region, said Ali Ndume, a senator representing southern Borno state, in which Chibok is located.

"Soldiers and the Civilian Joint Task Force, as well as volunteers from the area, are now combing the forest to rescue the school girls. They are aided by surveillance helicopters to locate the kidnappers' position," Ndume said.

The teams ventured into the forest after a broken down truck that was believed to have been part of the kidnapping convoy was found abandoned at the edge of the forest, which suggests that the abductors took their hostages into the woods on foot, he added.

A military official involved in the rescue operation also confirmed a broken down truck was found in the bush.

"We are now trying to locate the whereabouts of the abducted girls," said the military source, who asked not to be named because he was not authorized to speak on the issue.

Borno state's education ministry said there were a total of 129 girls at the school at the time of the abduction. The incident came during the final exams period.

However, a student who was one of around a dozen girls who managed to escape from the kidnappers said at least 200 girls were taken away by Boko Haram.

The group has recently stepped up attacks in the region, and its leader released a video last month threatening to kidnap girls from schools.

Meanwhile, distraught parents of the abducted girls anxiously waited for news, many of them crowded outside the burned home of the Chibok district administrator.

The gunmen burned homes and businesses in the town as they fled with the girls, witnesses said.

"We are calling on the government to do everything possible to track these people and save your daughters from them. They should not allow our daughters' dreams to be shattered by these murderers," said the mother of one abducted girl.

A student who was among the girls who escaped recounted her ordeal.

"They forced us into trucks, buses and vans, some of which were carrying food stuffs and petrol. They left with us in a convoy into the bush," said the student, who declined to be named for security reasons. "A group of motorcyclists flanked the convoy to ensure none of us escaped."

At one point, one of the trucks broke down and the girls on that vehicle were transferred to another one, the student said. The broken down truck was set on fire, she added.

When another vehicle broke down and the men tried to fix it, "some of us jumped out of the vehicles and ran into the bush. We later found our way back to Chibok," she said.

Boko Haram, which translates as "western education is sin," is known to have carried out deadly attacks on other schools in the northeast. In a clip released by the group March 23, leader Abubakar Shekau threatened to launch raids and abduct girls from schools.