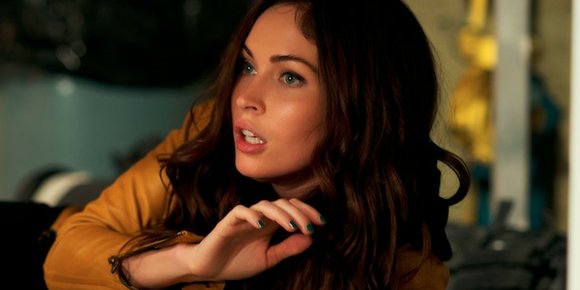 The new reboot of Teenage Mutant Ninja Turtles has been surrounded by controversy from the very beginning. To start, of course, there were those who didn’t feel like a reboot was really necessary, but then the project started dealing with public minefields regarding Michael Bay’s involvement, alien origins, misleading quotes identifying William Fichtner as Shredder, snoutless Turtles, and more. Fans have spent many months complaining online, but now that the film is nearly out, Megan Fox has a message for all the haters: "Fuck off."

This message was delivered earlier today during a Teenage Mutant Ninja Turtles press conference CINEMABLEND attended in Los Angeles. The panel – which also included co-star Will Arnett, director Jonathan Liebesman, and a number of the film’s writers and producers – was asked how they felt about some of the backlash against their movie online. Fox was quick to respond, and began by referencing the Michael Bay franchise that started her career:

"Let me tell you something about those people. How much money did Transformers 4 make? Exactly. Those people can complain – they all go to the theater. They’re gonna love it – and if they don’t love it, they can fuck off, and that’s the end of that."

It’s a tad bit strange that this is actually the second time in the last year alone that someone from a big blockbuster franchise has told portions of their fanbase to "fuck off." Some of you may remember last September when screenwriter/producer Bob Orci chose those exact same words for a fan publically criticizing his movie Star Trek Into Darkness. I guess the big difference is that Megan Fox’s words are more preemptive. If you buy a ticket and hate Teenage Mutant Ninja Turtles, Megan Fox’s "fuck off" will be waiting for you as you exit the theater.

It’s worth noting that Megan Fox’s casting in Teenage Mutant Ninja Turtles earned plenty of ire from fans back in February of last year, which could very well explain her passion in this manner. Looking back at the comments section from she first signed on to the new blockbuster, you’ll notice quite a bit of negativity towards her – largely due to her connection with Michael Bay. Hell, even TMNT co-creator Peter Laird was vocally negative about her casting online. It’s not hard to see why she would feel this way.

For more information go to htttp://www.cinemablend.com