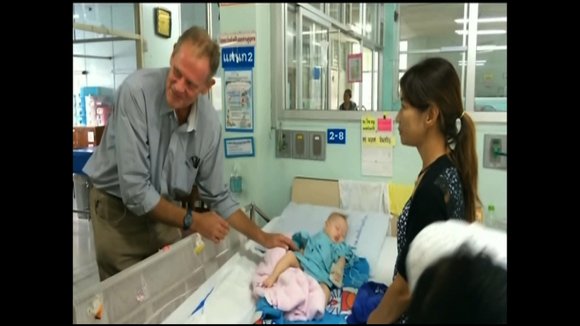 An Australian couple refuses to take a baby from their Thai surrogate after it is revealed he has Down Syndrome. They took his healthy twin. Embargoed to Australia; Thailand

What was supposed to be a straightforward cash deal to carry a child for desperate parents has turned into an international spat over who said what, and exposed the darker side of a business credited with creating happiness for many couples.

At the center of the debate is Gammy, a seven-month-old Down Syndrome baby with a congenital heart condition who is currently receiving treatment for a lung infection at a private hospital in Thailand.

After initially denying they knew about baby Gammy, a friend of the couple issued a statement to a local Australian newspaper saying the pair only left Gammy because they were told he was likely to die.

"Gammy was very sick when he was born and the biological parents were told he would not survive and he had a day, at best, to live and to say goodbye," the unnamed friend told the Bunbury Mail, in Western Australia, where the couple live.

The friend said the surrogate mother gave birth at a different hospital to the one agreed upon, which made the surrogacy agreement void. The couple was scared, she said, that Pattharamon would change her mind about the second child, and they'd have to leave Thailand with no children at all.

According to the report, the friend noted that the backdrop to the surrogacy row was a military coup in the country and "it was very difficult to get around."

The takeover took place in the early hours of May 22, 2014 when Commander of the Royal Thai Army General Prayuth Chan-chua announced in a national broadcast he was now in charge.

"This has been absolutely devastating for them, they are on the edge," the friend added, referring to the days of media scrutiny and debate over their decision, months after they returned home.

Pattharamon claimed the couple asked her to terminate the Down Syndrome child when she was seven months pregnant.

Not true, the couple's friend said.

After the babies' birth, Pattharamon claimed they bought nappies and milk for the baby girl, but "didn't even look at the boy."

Also a lie, the friend added.

Whatever the details of who said what, the case has attracted attention to a largely unregulated industry subject to a confusing tangle of laws and loopholes.

In the state of Western Australia, where the couple is from, it's legal to seek surrogacy abroad.

There are no checks for criminal history, and no counseling is required for couples seeking offshore surrogacy, said Jenni Millbank, an expert in Australian surrogacy law from the University of Technology in Sydney.

"If surrogacy were taken onshore there would be counseling protocols prior to conception, as well as a welfare report after birth required before legal parentage is transferred; but these are not steps that occur with offshore surrogacy," said Millbank.