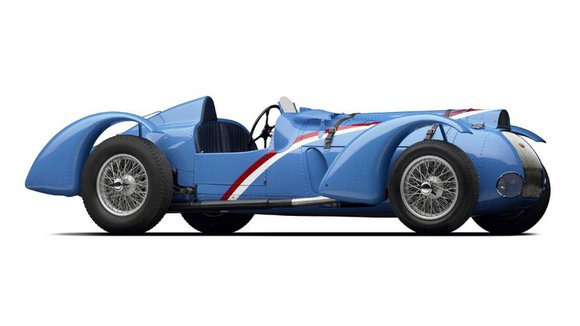 The Million-Franc Delahaye Type 145 will race at the Rolex Monterey Motorsports Reunion.

The Rolex Monterey Motorsports Reunion returns Aug. 14-16 at Mazda Raceway Laguna Seca during Pebble Beach week. Among the historic cars will be the so-called Million-Franc 1937 Delahaye Type 145 V12, one of France’s most significant race cars. It sits at the Mullin Automotive Museum, and will run on the track for the first time in the U.S. since 2006.

In the 1930s German and Italian companies dominated the racing scene. The French government Automobile Club of France offered any manufacturer one million Francs if one of them could beat Italian speed record around the Autodrome de Montlhery.

In 1937 French driver Rene Dreyfus drove the Delahaye 16 laps at Montlhery with a fast-for-the-era average speed of 91 mph. Delahaye took home the million Francs. The next year, the same Delahaye made headlines when it overtook a Mercedes-Benz W154 for a victory at the 1938 Grand Prix de Pau.

“I am thrilled to bring the Million-Franc Delahaye back to the racetrack where it truly belongs,” said Peter Mullin, founder and chairman of the Mullin Automotive Museum. “This was the car that did the unthinkable and beat the German’s Silver Arrows at the Grand Prix de Pau. Once again, the Delahaye will have the opportunity to demonstrate its prowess in a track environment.”

The Delahaye’s magnesium V12 received a full restoration for the vintage race. Delahaye expert Richard Adatto and restorer Jim Stranberg did the research to confirm the car’s provenance. The team analyzed archives, including the homologation papers from 1937.

Peter Mullion will pilot the car in Group 2A, which features race cars built between 1927 and 1951.