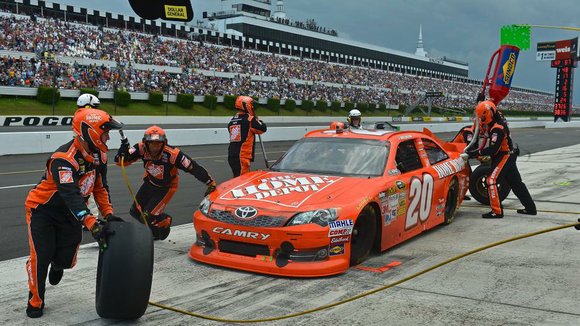 The sky darkens over Pocono Raceway in 2012. A woman is suing NASCAR and Pocono Raceway after a lightning strike near the track killed her husband in 2012.

The widow of a man killed by a lightning strike at Pocono Raceway in 2012 has sued NASCAR and the racetrack.

The woman claims that NASCAR or Pocono Raceway should have stopped the race or done more to warn fans of the severe weather. The widow of Brian Zimmerman filed a lawsuit earlier this month.

In the suit, she claims that Pocono Raceway knew dangerous weather was in the area, but failed to stop the race or adequately notify fans.

Zimmerman was killed Aug. 5, 2012 in the parking lot outside the racetrack.

He was struck by lightning just about five minutes after officials called the race because of the storm.

The suit alleges that track officials and NASCAR knew the foul weather was approaching and knew a thunderstorm warning had been issued, but were negligent in not doing enough to warn fans.

The track sent out a pair of tweets telling fans about the warning and to seek shelter. However, Zimmerman didn't have a smartphone.

The suit is the second to be filed in connection with the storm. In July, the wife of a man who suffered injuries from the strike also sued the track and NASCAR.

All tickets issued by Pocono Raceway have a contract that says the buyer releases the track from any liability. However, the suit alleges that the contract is null and void because the fine print is "inconspicuous" and because the track didn't tell ticket holders to read the ticket before attending the race.