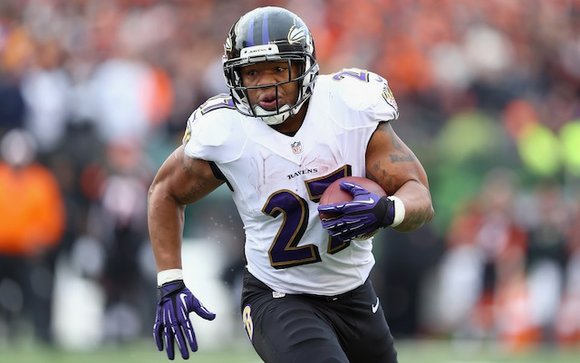 CNN) -- Here's a look at the life of suspended NFL running back Ray Rice.

Other Facts: Rice's father, Conrad Reed, was accidentally killed in a drive-by shooting when Rice was one year old.

Myshaun Rice-Nichols, a cousin and father figure to Rice, was killed in a car accident when Rice was eleven years old.

Founded the Ray Rice Charitable Fund to support underprivileged children in Baltimore and his hometown of New Rochelle, New York.

Timeline: April 26, 2008 - Selected in the second round, 55th overall, in the NFL draft by the Baltimore Ravens.

February 15, 2014 - Ray Rice and his fiancée, Janay Palmer, are involved in an early-morning fight on an elevator in an Atlantic City, New Jersey, casino. Atlantic City police say Rice and Palmer struck each other with their hands and refused medical treatment at the scene. The couple is arrested and taken to the Atlantic City Police Department holding facility. Each is charged with simple assault.

February 19, 2014 - TMZ releases video of Rice dragging Palmer out of the elevator in which the incident occurred.

March 27, 2014 - Rice is indicted by an Atlantic County grand jury on a charge of third-degree aggravated assault. The charge against Palmer is dropped. Rice and Palmer are married the next day.

May 1, 2014 - Rice pleads not guilty to aggravated assault and applies for a program for first-time offenders that could clear him of charges in one year.

May 23, 2014 - The Ravens hold a news conference with Rice and Palmer. Rice apologizes for "the situation my wife and I were in."

July 31, 2014 - Rice tells reporters at a Ravens news conference that the violent incident is not representative of who he is. "You know that's not me," he says. "You know that's something I have to live ... with the rest of my life." He calls his actions "inexcusable."

August 1, 2014 - NFL Commissioner Roger Goodell addresses the media for the first time after Rice's suspension while in Canton, Ohio, for the Pro Football Hall of Fame ceremonies. He defends his decision: "I take into account all of the information before I make a decision on what the discipline will be. In this case, there was no discipline by the criminal justice system. They put him in that diversionary program."