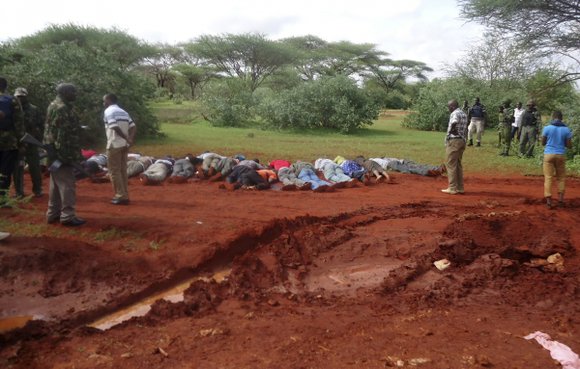 In addition to Kenya and Somalia, the terror group has struck in Uganda, where it killed more than 70 people gathered to watch a broadcast of the World Cup Final soccer match in Kampala in 2010.

(CNN) -- Al-Shabaab militants raided a quarry in Kenya, separating non-Muslim workers from their Muslim counterparts and executing them, a spokesman for the group said Tuesday.

At least 36 bodies were found Tuesday dumped in the quarry in the village of Kormey, near the Somali border, the Kenyan Red Cross said.

Al-Shabaab said the attack was retaliation for mosque raids that Kenyan security forces carried out last month to weed out extremists.

Kormey is about 15 kilometers (9 miles) from the border city of Mandera, in an area where the Somalia-based Al-Shabaab militants are known to operate.

Last month, the Islamist militants ambushed a bus in Kenya and sprayed bullets on those who failed to recite Quran verses, killing at least 28 people, authorities said.

The bus, which had 60 people aboard, was heading from Mandera to the capital of Nairobi.

The group says the latest attacks are a response to the police raid on multiple mosques in the port city of Mombasa after explosives were found in one.

"Our Mujhahideen forces are always ready to launch frequent deadly cross-border attacks against Kenya as a revenge," group spokesman Sheikh Ali Dheere said in a statement read on a pro-Al-Shabaab radio station in Somalia.

Kenyatta said the recent attacks constituted "a war, and a war we must win."

Tuesday's attack was swiftly condemned, with Nairobi's Jamia Mosque, the largest in the country, calling it a "beastly tactic."

"This unfortunate and ugly incident should not be used to divide peace loving Kenyans who have lived harmoniously for centuries -- along religious or ethnic lines," the mosque said in a statement, "but rather it should be taken to reflect on improving the security situation of the country."

Al-Shabaab, which has ties to al Qaeda, has launched a series of attacks in Kenya since Kenyan forces went into neighboring Somalia in 2011 to battle the extremists.

Last year, Al-Shabaab raided a Nairobi mall in a brazen attack that left 68 people dead and kept shoppers under siege for days.

In addition to Kenya and Somalia, the terror group has struck in Uganda, where it killed more than 70 people gathered to watch a broadcast of the World Cup Final soccer match in Kampala in 2010.

As the attacks get more daring, the international community has rallied to battle the militants.

In September, a U.S. airstrike killed Al-Shabaab leader Ahmed Godane. The terror group later replaced him and vowed to avenge his death.