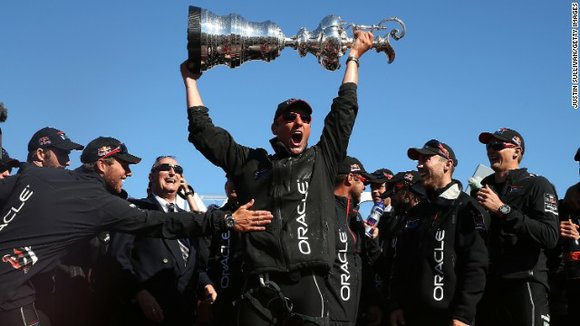 The 2013 staging in San Francisco saw Oracle make a successful defense of the Cup in one of the most exciting finales in its history, beating Team New Zealand in the deciding race.

(CNN) -- Oracle Team USA will make its defense of the America's Cup in 2017 off the island of Bermuda, a British overseas territory in the Atlantic Ocean.

The announcement was made Tuesday at a glitzy ceremony in New York, attended by Hollywood film stars Michael Douglas and Catherine Zeta Jones, who have been residents of Bermuda.

It will be the first time that an American syndicate has defended the prestigious trophy in foreign waters in a competition dating back to 1851.

"In Bermuda we have a perfect international venue to demonstrate the excitement America's Cup boats and teams can generate," commercial commissioner Harvey Schiller was quoted on the event's official website.

"One spot," he said "offered everything we needed to make the 2017 America's Cup an exceptional event."

The 2013 staging in San Francisco saw Oracle make a successful defense of the Cup in one of the most exciting finales in its history, beating Team New Zealand in the deciding race.

New Zealand will join four other challengers, Artemis Racing of Sweden, the UK syndicate Ben Ainslie Racing, Luna Rossa Challenge from Italy and Team France, who will battle to earn the right to challenge Oracle for sailing's most prestigious honor.

62-foot catamarans have been chosen for the racing and Oracle's skipper Jimmy Spithill is already looking forward to the task ahead.

"Racing in Bermuda will be an incredible experience for the spectators, both on-site and for those watching the broadcast, and for the sailors, it's going to be very challenging," he said.

"I've raced there several times and the variety of conditions means you can never let your guard down. We'll all need to be at the top of our game to have success and that's how it should be."

It is a major boost for the economy of Bermuda, which is heavily reliant on tourism and financial services, fighting off the reported challenge of San Diego in California for the staging rights.

Bermuda Premier Michael Dunkley said he hoped his island would host an "unforgettable experience" for those present or watching on television.

"We thank the America's Cup for their confidence in us -- and for their vision to evolve the experience for spectators and participants alike.

"This announcement today marks an exciting new chapter for Bermuda too. That our futures are linked in such a meaningful way will make for a great partnership," he said.

Renowned as a playground for the rich, Douglas, whose mother is Bermudian, is developing a resort complex, he first revealed on official Facebook page back in April.