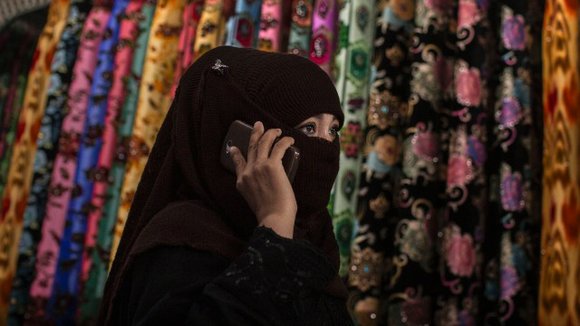 The new ban in Urumqi was first reported on ts.cn, a Xinjiang government-run website, and later widely published by other state media outlets.

The new ban in Urumqi was first reported on ts.cn, a Xinjiang government-run website, and later widely published by other state media outlets.

The ordinance name suggests it targets outer garments covering someone's full body including the face, which is called a burqa in some Islamic traditions.

A spate of recent violent incidents has rocked Xinjiang, a resource-rich region long inhabited by the Turkic-speaking, largely Muslim Uyghurs.

The arrival of waves of Han Chinese, the country's predominant ethnic group, over the past decades has fueled ethnic tensions.

Chinese officials have blamed the recent attacks on Uyghur separatists -- whom they also label "religious extremists" -- seeking to establish an independent state.

The ts.cn story mentioned the Urumqi law was submitted to the provincial legislature for final approval before it could be implemented.

In August, another city in Xinjiang banned people wearing Islamic-style clothing and large beards from riding public buses during a provincial sporting event, according to state media.

News reports at the time said Karamay city authorities targeted veils, large beards, as well as three types of Islamic dresses -- including those with the star and crescent symbol. Dozens of bus stations in the city were said to be manned by security personnel to conduct checks and report violators to the police.

While the measures in Karamay didn't openly single out Uyghurs, exiled Uyghur rights groups have condemned them, calling the ban a "green light" for racism and discrimination.

Those restrictions came a month after authorities in Xinjiang banned students and civil servants from fasting during Ramadan, the Muslim holy month.

Other critics, including exiled Uyghur activists, have attributed the rise of violence in Xinjiang to Beijing's increasingly repressive rule there -- a claim the government vehemently denies.

On Monday, a court in Urumqi convicted more than a dozen suspects with Uyghur-sounding names for their roles in two separate violent attacks in the city earlier this year.

Eight people were sentenced to death, while five others received suspended death sentences.