Protesters gear up for weekend marches against police violence 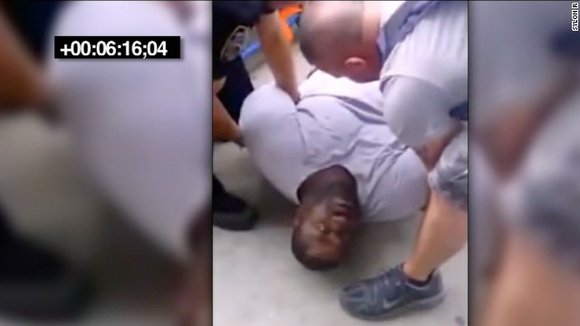 Daniel Pantaleo, the police officer who a New York grand jury decided not to indict in Garner's death, spoke with internal affairs investigators this week.

(CNN) -- After days of descending on cities coast to coast, protesters demanding an end to alleged police brutality are expected to get loud again on Saturday.

In recent weeks, throngs have taken to the streets nationwide after grand juries decided not to indict white police officers in the deaths of Michael Brown and Eric Garner in Missouri and New York City, respectively.

Saturday will culminate what organizers are calling a "Week of Outrage," with large demonstrations planned in major cities.

"Our message is very simple," Carl Dix said in a statement on the group's website. "Since the 'normal routine' of America has always included murder of black and Latino people by law enforcement, this week, that 'normal routine must be disrupted.'"

Eric Garner Jr., the son of the man who died after a New York police officer held him in what appeared to be a chokehold, said he was proud of the protests.

"It's amazing how everybody (is) doing this. My father and I appreciate it," the son told CNN's "Erin Burnett OutFront."

Some peaceful protests across the country this week have been marred by bouts of violence and crowds that disrupted thousands of motorists by shutting down freeways.

But despite those instances, protests have continued to draw some notable names.

In Washington, minority congressional staffers walked off their jobs and gathered on the steps of the Capitol on Thursday with their hands raised to show support for the families of Brown and Garner.

Rep. John Lewis, D-Georgia, who fought to end segregation and racial discrimination in the South in the 1960s, also joined the group.

And the support is not limited to political figures.

Cleveland Cavaliers' LeBron James is one of the big names speaking out.

Before the team faced the Brooklyn Nets on the basketball court Monday night, James wore a T-shirt that said "I can't breathe" -- Eric Garner's last words, which have become a rallying cry for protesters.

"It was a message to the family. I'm sorry for their loss," the four-time league MVP said.

"As a society, we know we need to get better, but it's not going to be done in one day. Rome wasn't built in a day."

President Barack Obama spoke about the future of race relations in America to a network that reaches a predominantly young African-American audience.

In his interview, the President said African-American youths need to be both persistent and patient in order to make progress on the issue of racial tensions in America.

Daniel Pantaleo, the police officer who a New York grand jury decided not to indict in Garner's death, spoke with internal affairs investigators this week.

"He indicated he never used a chokehold," said Stuart London, his attorney. "He used a takedown technique he was taught in the academy. He said he never exerted any pressure on the windpipe and never intended to injure Mr. Garner."

In Missouri, Officer Darren Wilson, who maintains he shot Brown in August out of fear for his life, resigned from the Ferguson Police Department last month.