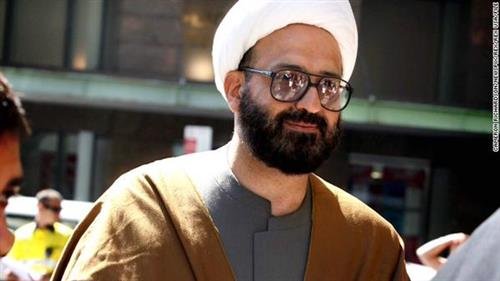 (CNN) -- The man who held hostages in a Sydney cafe for nearly 16 hours is Man Haron Monis, an official with direct knowledge of the situation said Monday.

For that offense, he received 300 hours of community service, the Weekend Australian reported.

In 2013, he was charged with being an accessory to the murder of his ex-wife, according to Australian news reports that say he has been free on bail.

In April, sex crimes detectives arrested Monis and charged him with sexually assaulting a woman in western Sydney in 2002, according to The Sydney Morning Herald. Other sex-related charges were added regarding six additional victims, the newspaper said. Police reportedly said Monis was using the name Mohammad Hassan Manteghi and claimed to be a "sexual healer."

There is a pledge of allegiance to the so-called Islamic State terror group on what appears to be Monis' website.

The site says Monis is a Muslim cleric and activist based in Sydney who has "continuously been under attack & false accusation by the Australian government & media since he started his political letter campaign from 2007."

There's a graphic photo of slain children at the top of the site. Under the image, it reads, "This is an evidence for the terrorism of America and its allies including Australia. The result of their airstrikes."

The site describes Monis as a victim of a political vendetta and compares him to Julian Assange, the WikiLeaks founder who has claimed the sex crime allegations he faces are politically motivated.

A YouTube video posted in November shows Monis standing on a street corner, chains draped over him, carrying a sign that says, "I have been tortured in prison for my political letters."

Crisis in a cafe

Australian media captured haunting images of hostages pressing their hands against the cafe's windows. They were reportedly taking turns holding a black flag with Arabic writing on it that said, "There is no God but God and Mohammed is the prophet of God."

The man holding the hostages demanded to speak to Australian Prime Minister Tony Abbott. Police were monitoring social media because hostages appeared to be posting information about the man's demands.

Hours into the crisis, at least five hostages managed to escape, running terrified toward police in riot gear. That made the hostage-taker furious, reported Chris Reason, a correspondent for CNN affiliate Seven Network. Reason said he could see the gunman become "extremely agitated" when he realized what had happened, and he "started screaming orders" at the remaining hostages.