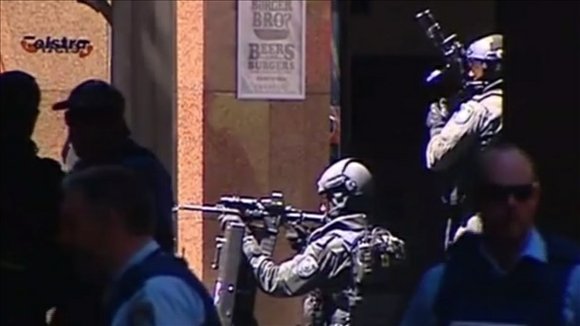 Gunfire erupted amid the chaos. After a brief episode of violence, the crisis appeared to ease, with police officers assuming a more relaxed pose, according to Australian media.

Australian special forces and police stormed the Lindt cafe in Sydney early Tuesday from two directions, and the hostage-taker was shot and killed, a national security source in the United States told CNN. There were at least nine people in the building at the time, the source said. The gunman was wearing a thick black vest and law enforcement was concerned it could contain explosives, the source said. An ordnance team cleared the building and checked the gunman, the source said. No information was given on whether any explosives were found.

(CNN) -- Australian police stormed the cafe where a self-styled Muslim cleric had been holding hostages early Tuesday, ending a crisis that had shut down central Sydney for hours.

Police have not commented on casualties in the raid, but Australian media reported that some people may have died and others may have been injured. Police have not disclosed the fate of the gunman, identified by an official with direct knowledge of the situation as Man Haron Monis. It was unknown if any police were injured.

Hundreds of police officers, including snipers, surrounded the Lindt Chocolate Cafe in Sydney's central business district shortly after the gunman took over the building at 10 a.m. Monday (6 p.m. ET on Sunday).

Chilling images from Australian media on Monday showed people, believed to be hostages, with their hands pressed against the cafe's windows. They were holding up a black flag with Arabic writing on it reading, "There is no God but God and Mohammed is the prophet of God."

Five hostages sprinted out of the cafe toward heavily armed police officers several hours into the standoff, sending the gunman into an agitated tirade, according to an Australian reporter.

Chris Reason, a correspondent for CNN affiliate Seven Network, said the gunman became "extremely agitated" when he realized what had happened and "started screaming orders" at the remaining hostages.

Reason said he could see the gunman pacing past the cafe's windows from his vantage point at the network's nearby offices. He described the man as unshaven, wearing a white shirt and black cap and carrying a shotgun.

Some had also reportedly posted messages to social networking sites and the YouTube online video service. Police urged media early Tuesday not to show the videos.

Monis, also known as Sheikh Haron, pleaded guilty in 2013 to writing letters to Australian service members saying they were "Hitler's soldiers," according to Australian media reports.

He was believed to be acting alone and does not appear to be part of a broader plot, additional U.S. law enforcement and intelligence sources said Monday.

Beyond the demands for the flag and phone call, precisely what he wanted remained murky late Monday.

As night fell, Reason said, the cafe's lights had been turned off, plunging the interior into "complete darkness."

In what appeared to be a dramatic ending to the hostage situation early Tuesday morning, police could be seen throwing flash-bang grenades into the cafe in video aired by Seven Network.

Gunfire erupted amid the chaos. After a brief episode of violence, the crisis appeared to ease, with police officers assuming a more relaxed pose, according to Australian media.

It's unclear how many hostages were in the building at the time.

Before some of the hostages had fled, Seven Network reported that at least 13 people were being held at the cafe, but police declined to say how many were in there. New South Wales Police Deputy Commissioner Catherine Burn said it was fewer than 30.

"We are doing all we can to set you free," New South Wales Police Commissioner Andrew Scipione said at a news conference Monday, hours before Tuesday's rescue attempt, directing his comments to the hostages and their loved ones.