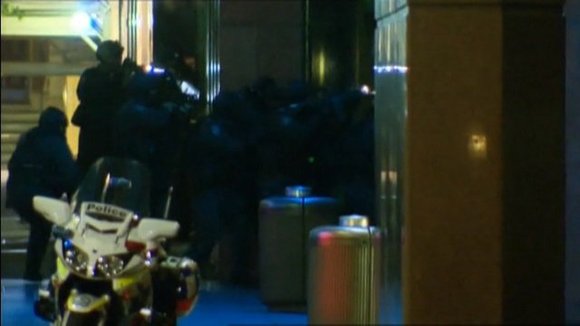 (CNN) -- The gunman who held hostages for more than 16 hours in a Sydney cafe was no stranger to police -- and was on bail for violent criminal offenses at the time of the siege.

"It's pretty obvious that the perpetrator was a deeply disturbed individual," he said at a press conference Tuesday, adding that the 50-year-old was "well known" to federal and state police, as well as the Australian Security Intelligence Organization.

"But I don't believe he was on a terror watch list at this time."

New South Wales Premier Mike Baird said authorities were investigating why Monis -- who was killed in the siege -- was at large, given his criminal background.

The self-styled Muslim cleric, also known as Sheikh Haron, was facing dozens of charges at the time of the siege, including two counts of being an accessory to the murder of his ex-wife, according to the Attorney General of New South Wales.

Noleen Hayson Pal was found dead with multiple stab wounds in a stairwell, and her body had been set on fire, The Sydney Morning Herald reported.

"They should have put him away and thrown away the key," the dead woman's godfather, Ayyut Khalik, told NBC News. He said Monis used to beat Pal, forcing her to wear a hijab all the time and forbidding her from talking to "outsiders."

According to the Sydney Morning Herald, the initial charges, laid in May 2014, related to an alleged sexual assault on a woman in western Sydney in 2002, before other sex-related charges were added regarding six additional victims.

Monis was using the name Mohammad Hassan Manteghi -- his birth name, according to Iran's state news agency IRNA -- and claimed to be a "healer," according to the report.

Monis also pleaded guilty last year to writing offensive "poison pen" letters to the families of Australian soldiers who died in Afghanistan, and was sentenced to 300 hours of community service. The letters were "sadistic, wantonly cruel and deeply wounding," one High Court judge said at the time, according to CNN affiliate Seven News.

But the criminal accusations against him began even before he came to Australia.

A spokesperson at Iran's embassy in Canberra told CNN that Tehran had officially requested Monis's extradition but nothing had come of it. Monis had been granted political asylum in 2001 and had had no further contact with his birth country, the spokesperson said.