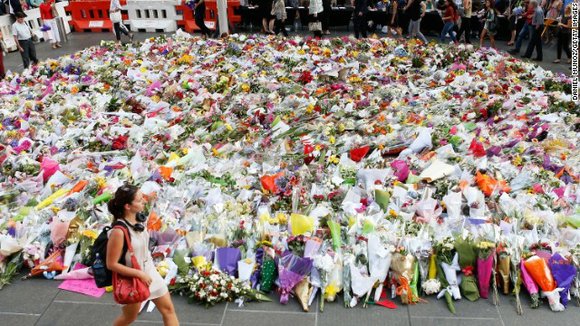 "We're a country that is not innocent of these issues," Kim Beazley, Australian ambassador to the United States, told CNN's "The Lead With Jake Tapper," on Wednesday.

(CNN) -- The gunman behind the deadly siege of a cafe in Sydney this week was not on a security watch list, and Australia's Prime Minister wants to know why.

"There's no doubt about that, and this is why we've got to constantly learn the lessons of everything that happens," he told the Australian Broadcasting Corporation. "We've got to be constantly asking ourselves: Is this the best we can do?

"And frankly, we've got to always be better at this because if we aren't good at this, our people suffer. And the tragedy of this atrocity is that two delightful Australians, two very decent people, are dead. Others are injured. Others are traumatized because of a madman who was roaming our streets," the Prime Minister said.

His office announced that authorities will carry out an urgent review into the hostage taking and "what lessons can be learned from the events leading up to and surrounding the siege."

At a news conference later Wednesday, Abbott told Australians, "I will not rest until I am confident that you are as safe as any government can possibly make you."

A report on the conclusions of the review is due by the end of January.

Authorities have identified the gunman as Man Haron Monis, an Iranian-born refugee who was granted political asylum in Australia.

He seized control of the Lindt Chocolate Cafe in the heart of Sydney's central business district and held it for some 16 hours.

The siege ended when police stormed the cafe early Tuesday. The gunman was killed, but so were two hostages -- Katrina Dawson, a 38-year-old barrister and mother of three, and Tori Johnson, the manager of the cafe.

Monis was on bail for violence criminal offenses at the time of the attack. He had a long history of mental illness and violence, the Prime Minister said.

At the news conference in Canberra later in the day, he also raised questions about how Monis was able to obtain permanent residency in Australia, as well as welfare benefits.

"I share the exasperation of the Australian public at what appears to be someone who's been having a lend of us, for many years," Abbott told reporters.

He also said that the gunman had a firearms license, but the Australian Federal Police later clarified that that wasn't true. The federal police, who had originally given Abbott the erroneous information, said the confusion arose from an entry in a national database that was now being investigated.

At the news conference, Abbott said he also wanted to know why Monis seemed to have fallen off Australian security agencies' watch lists in 2009.

But he offered little in the way of details about what took place in the final hours of the siege.

"When you are in a firefight, all sorts of things happen," Abbott told reporters. "The important thing for the police in a situation like that is to take care of the terrorist as quickly as possible."

He said that on the police's advice, he had refused to act on the gunman's demand to talk to him during the siege.

As authorities work to find the answer to that, and other unanswered questions, a makeshift memorial has sprung up in Sydney as people come to pay tribute to the victims. Thousands of people have left flowers, cards and signed condolence books.

"We're a country that is not innocent of these issues," Kim Beazley, Australian ambassador to the United States, told CNN's "The Lead With Jake Tapper," on Wednesday.