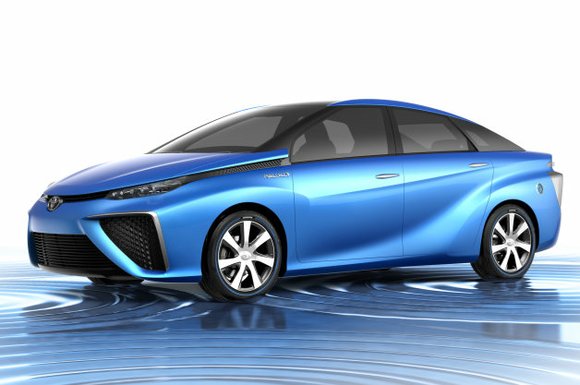 Seen from the inside -- which is really the best way to see this car -- the Mirai could almost be a Lexus. The futuristic interior with its gear selector toggle has a hint of Prius about it but the overall quality and construction seem up to luxury car standards or at least really close.

NEW YORK (CNNMoney) -- Toyota's new Mirai hydrogen fuel cell vehicle is worth a good, serious look. It won't be easy, though. While hydrogen fuel cell cars are mired in controversy, there's one thing everyone seems to agree on about this one.

It is kind of ugly.

Toyota's designers wanted an appearance that clearly showed this car is something different. Score one there.

They also wanted a design that would never grow boring now matter long the car was on the road or how many of them you saw. Two wins for the Toyota design team.

Hydrogen fuel cell vehicles, this one included, have a lot going for them. You fill up with compressed hydrogen gas -- that takes about five minutes -- then a fuel cell stack in the car combines that hydrogen with oxygen from the atmosphere in a process that makes water (H2O) while throwing out a stream of electricity. So, as with a plug-in electric car, you get no nasty emissions from the car plus it takes only a few minutes, not hours, to "recharge" for a full 300 mile range.

The most obvious downside is... Hydrogen? They don't sell that down at the Shell station, do they? No, unless you live in California, they almost certainly don't. But Toyota and a few other automakers with hydrogen vehicles to sell are working to make hydrogen at least a little easier to get. And they're also working on environmentally friendly ways to make pure hydrogen gas.

Making hydrogen is where a lot of the controversy comes in. While hydrogen is the most abundant element in the entire universe it just happens to be a particularly friendly element, too. It doesn't naturally hang out by itself. That means it has to be split out from some other substance like water or, very often, natural gas.

Wait... Natural gas? That means fracking! Fracking is an extremely controversial method of getting natural gas out of the earth's crust. It makes a lot of people very, very angry.

But hydrogen doesn't have to be made from natural gas taken out of the ground. For instance, there are hydrogen fueling stations that make hydrogen from the gases produced by rotting garbage or even the stuff you flush down the toilet. Yeah, I know. Nasty. But at least they're making good use of it.

Then there's the way the hydrogen is extracted from gas or water. To get hydrogen out of whatever it is in you have to apply energy. That's sometimes done with electricity but most often by applying heat from something like burning natural gas. And , again, that gas could come from sources other than the earth.

Now, about the car itself... Toyota touts the Mirai as a fun-to-drive car and, in a weird way, it sort of is. Despite a supposedly low center of gravity, thanks to heavy batteries, it is still a tall car and it wobbles through turns. The up-side of the Mirai's canoe-like rocking is that the ride is quite comfy. The backseats are also roomy and fairly comfortable.