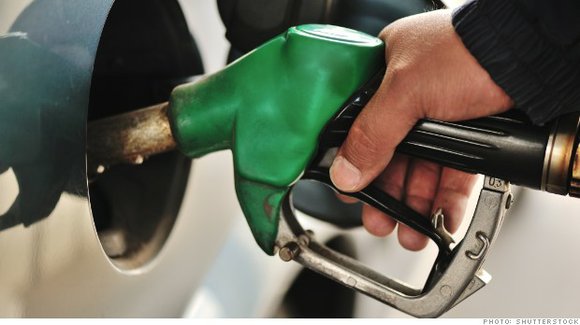 That's exactly what 49-year-old Marxsen decided to do with the money he is saving on his travels for work.

NEW YORK (CNNMoney) -- Rick Marxsen knows exactly how much gas cost the last time he filled up the tank of his Toyota Tacoma.

He paid $2.29 a gallon in Denver, Colorado. Gas is even cheaper in his eastern Nebraska hometown, but he had to go with what was available when he was traveling for work as a member of a Union Pacific railroad construction gang.

The U.S. government estimates Americans will save $550 on gas in 2015, and many have already saved hundreds this year. For people like Marxsen who are on the road constantly, it's an even bigger benefit.

Marxsen and his colleagues often travel up to 700 miles to do repairs on the railroad lines. They trade tips on how to survive lonely stretches of Wyoming highway and, since they receive per diem travel rates, they trade tips on where to find the cheapest gas.

Back when gas was over $3.50 in the summer, Marxsen would barely break even on some trips. Now that gas is so low, his per diem is almost like a bonus.

The savings are clear. The question now for Marxsen and millions of other Americans is what to do with the money: spend, save, invest or donate it.

Economists predict that every cent lower gas prices go adds about $1 billion to the U.S. economy, large because most people spend the "savings" elsewhere. Because the price of gas is so visible in America -- it's posted in big numbers at every gas station -- there's a real psychological effect.

Mike Chadwick, CEO of Chadwick Financial Advisors in Connecticut, is hearing from some of his clients: "Christmas is easier for me now because I have some relief from lower energy bills."

Katherine Dean, managing director wealth planning at Wells Fargo has similar advice: "If you aren't sure [what to do], then a good rule of thumb to follow -- save it."

She notes that everyone should have at least a few months of savings for emergency purposes -- the typical is about three to six months' worth.

One reader told CNNMoney that while his family hopes to save the money, it will almost certainly go straight toward paying higher health-care costs.