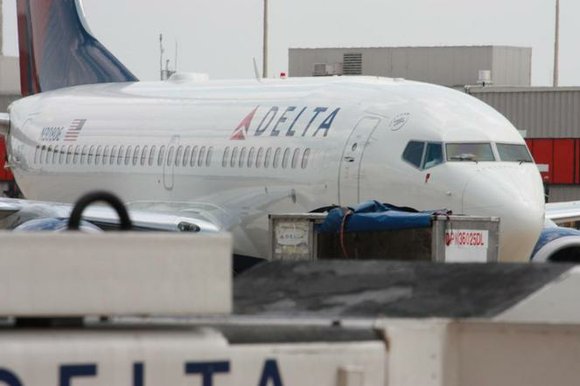 ATLANTA (CNN) -- Two men -- one employed by Delta Air Lines and another a former employee -- worked together to smuggle guns and ammunition on at least 20 flights from Atlanta to New York from May to December, New York officials said Tuesday.

"We have an egregious breach of security" at Hartsfield-Jackson Atlanta International Airport because airport employees "are not required to go through screening," said Kenneth Thompson, the district attorney of Kings County.

In total, 153 guns were recovered as part of a complex investigation that Thompson outlined using charts and surveillance video during a press conference in New York.

He praised Delta for being cooperative from start to finish of the undercover probe.

Eugene Harvey, who worked for Delta at the Atlanta airport, was arrested at his home in Atlanta on Monday, authorities said.

According to Harvey's arrest warrant affidavit, here's how the operation worked:

-- Henry allegedly brought the firearms in his carry-on luggage on at least five flights from Atlanta to New York between May 1 and December 10.

-- During that time frame, Henry supplied 129 handguns and two assault rifles to co-conspirators in New York, the affidavit states.

-- One of those co-conspirators ended up selling the firearms to an undercover New York police officer.

Henry was arrested in New York on December 10 after landing at JFK airport with 18 handguns in his bag -- seven of which were loaded, the affidavit says.

"During the post-arrest interview, Henry informed the investigating agents that he had flown from Atlanta to New York with the 18 firearms and associated ammunition in his carry-on bag," FBI task force agent George Taylor wrote in the affidavit.

So how could a man get more than a dozen guns on a flight in his carry-on backpack?

"Had the eighteen firearms been inside the Oakley bag when Henry passed through TSA screening, the firearms would have been discovered," Taylor wrote.

On the morning of December 10, the affidavit says, baggage handler Harvey used his security clearance to enter Delta's employee parking lot and then the secure area of the airport.

"Employees entering this area are not subjected to screening by the Transportation Security Administration (TSA), neither at the time of entry into the employee parking lot, nor upon entry to the internal secure/restricted area at Hartsfield-Jackson," the affidavit states.

Surveillance video showed that on the same morning, the passenger Henry cleared security with a black Oakley backpack. He then went to sit down at the airport's Concourse B.

According to Taylor, that's when Henry started texting Harvey. Moments later, Harvey entered a men's restroom in Concourse B. And Henry followed.

After one minute, the affidavit says, Henry walked out of the restroom with the backpack.

The criminal complaint also says on several occasions this year, Harvey used his security clearance to enter the secure Delta employee parking lot -- even though he was supposed to be off or on sick leave.

And on each of those dates, Henry boarded a flight from Atlanta to New York.

"We take seriously any activity that fails to uphold our strict commitment to the safety and security of our customers and employees," he said.