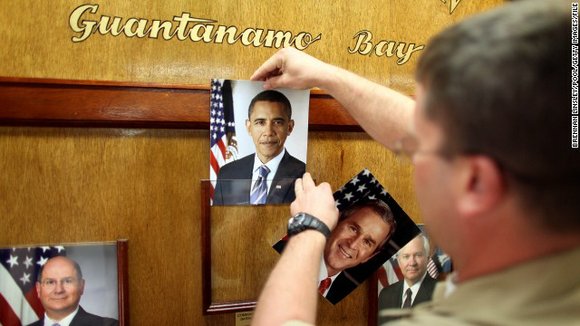 December 7, 2014 - Six detainees are transferred to Uruguay, including Abu Wa'el Dhiab, who has been on a hunger strike. Dhiab took his fight against forcible feeding to federal court in the District of Columbia.

(CNN) -- Here's a look at Guantánamo Bay Naval Station and its detention facilities.

Facts: The base, sometime referred to as "Gitmo," is located in southeastern Cuba, on the coast of Guantánamo Bay.

The U.S. has been leasing the 45 square miles that the base sits on since 1903. The base shares a 17-mile border with Cuba.

The U.S. pays the Cuban government approximately $4,085 a year for the lease. The last time time Cuba accepted the payment was in 1959.

The lease can only be terminated by mutual agreement.

Approximately 6,000 service members, civilians and contractors work at the base.

Detention Facilities: In response to the 9/11 attacks in 2001, and subsequent military operations in Afghanistan, existing migrant detention facilities at Guantánamo were re-purposed to hold detainees in the "war on terror."

During the administration of President George W. Bush (2001-2009), the U.S. claimed that Guantánamo Bay detainees were not on U.S. soil and therefore not covered by the U.S. constitution, and that "enemy combatant" status meant they could be denied some legal protections.

Shortly after his inauguration in 2009, President Barack Obama signed an executive order to close the detention facilities within one year. However, the facilities are still open as of 2014.

There are 132 detainees at Guantánamo Bay as of December 2014.

The number of detainees held at Guantánamo since it opened exceeds 750.

At least seven detainees have died in custody.

It costs the U.S. Defense Department about $150 million a year to run the detention facilities.

Timeline: 1903 - The new Republic of Cuba leases 45 square miles of land in Guantánamo Bay to the U.S. for construction of a naval station. Building on the naval station begins that same year.

1991 - Approximately 34,000 Haitian refugees are detained on the base after they flee a coup in Haiti.

January 11, 2002 - The first detainees from Afghanistan and Pakistan arrive at the temporary facility of Camp X-Ray.

June 28, 2004 - A divided Supreme Court rules that the Guantánamo detainees have some rights but leaves open how these rights will be exercised.

July 13, 2005 - A report presented to the Senate Armed Services details the interrogation of the suspected "20th hijacker" in the 9/11 attacks, Mohamed al-Khatani. He was forced to wear a bra, dance with a man and do dog tricks while tied to a leash. But military investigators said that was not considered prohibited, inhumane treatment.

April 19, 2006 - Following a Freedom of Information Act lawsuit by the Associated Press, the Pentagon releases the most detailed and extensive list of detainees ever provided. It provides the names and nationalities of 558 detainees who've gone through a hearing at Guantánamo Bay.