Why Exodus: Gods And Kings Was Just Banned From Movie Theaters 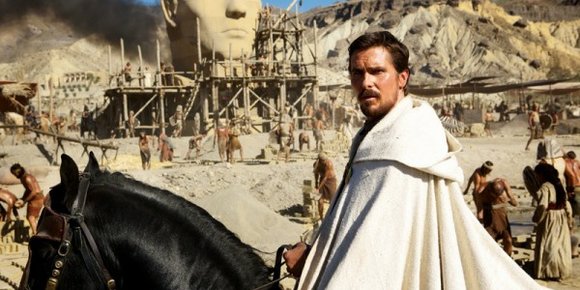 Move over, The Interview. You aren’t the only movie in theaters capable of whipping antagonists up into a frenzy because of your seemingly controversial content. Sir Ridley Scott’s sweeping Biblical epic Exodus: Gods and Kings continues to meet resistance as it marches through theaters, and this current turn has the Old Testament blockbuster fleeing from Egyptian multiplexes for one obvious reason.

BBC News has the story, reporting that Ridley Scott’s Exodus: Gods and Kings has been banned from movie theaters in Egypt because it is riddled with "historical inaccuracies." Among the problems raised by the head of the censorship board in Egypt? They dispute the claim that the enslaved Jews built the Egyptian pyramids, and also state that an earthquake caused the infamous parting of the Red Sea, and not an act of God, as Exodus -- and the Bible – claim.

I spoke with the cast of Exodus: Gods and Kings during a recent press event in Paris, and we spoke at length about the creation of the Red Sea sequence in Ridley Scott’s movie. They never once mention an earthquake.

The BBC goes on to report that the state-run Moroccan Cinema Centre initially approved of the film, which opened in the U.S. on December 12. Since that decision, though, officials have backtracked and now have banned the movie from being screened. This decision reportedly came down one day before the official premiere in Egypt.

This isn’t the first conflict facing Exodus as it worked its way to theaters. The movie was the target of a vicious, lengthy campaign against its casting decisions, with the term "whitewashed" tagged to the production because of its lack of Egyptian actors. Roles like Moses and Ramses went to British and Australian actors such as Christian Bale and Joel Edgerton. It’s possible that this perceived slight played a part in Egypt banning the movie, because I would imagine that multiple films with historical inaccuracies make it to theaters in Egypt. Exodus isn’t advertising itself as a documentary. Will the Egyptians shut down Night at the Museum: Secret of the Tomb, as well?

So far, Exodus: Gods and Kings has earned an estimated $107 million worldwide. It will continue to roll out to foreign territories, though you can scratch Egypt off its world-tour schedule.