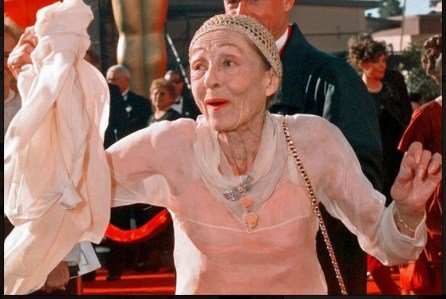 (CNN) -- Luise Rainer, who won back-to-back Oscars in the 1930s for "The Great Ziegfeld" and "The Good Earth" only to quit Hollywood at the height of her fame, has died.

Rainer's death was first reported by her daughter, Francesca Knittel Bowyer, on Twitter.

"Mummy had the fragility of an orchid, the energy of a hummingbird, the tenacity of a hunter. She could change calm waters into a raging storm with a look and the lift of a finger," Bowyer told CNN in an email. "My heart is a hole without her, but that hole will definitely be filled with incredible memories, sweet, salty and funny. I want her memory to linger with those who knew her and be given to those who did not."

Rainer, who was born in Dusseldorf, Germany, in 1910, was a well-known European actress when she was brought to America by MGM in 1935 in the belief she could be the next Greta Garbo. She immediately came through on their investment with her star turn in 1936's "The Great Ziegfeld," winning a best actress Oscar.

She repeated the achievement with 1937's "The Good Earth," based on Pearl S. Buck's novel, in which she played O-Lan, the wife of protagonist Wang Lung. With that prize, she became the first actress to win consecutive best actress Academy Awards -- a feat not equaled until Katharine Hepburn pulled off the trick for 1967's "Guess Who's Coming to Dinner" and 1968's "The Lion in Winter."

To date, they are the only actresses to have done so. Both Spencer Tracy and Tom Hanks have done so in the best actor category, and Jason Robards won two straight supporting actor Oscars.

But unlike Hepburn, who enjoyed a long career in movies despite the vagaries of fame, Rainer's life as a Hollywood star was short-lived -- by her own choice.

She had frequent battles with MGM boss Louis B. Mayer and didn't like the roles she was offered.

"All kinds of nonsense," she told the UK's Telegraph news site in 2009. "I didn't want to do it, and I walked out. Mayer said, 'That girl is a Frankenstein, she's going to ruin our whole firm.' He said, 'We made you and we are going to destroy you.' "

Instead, Rainer turned the tables and left MGM. Her marriage, to playwright Clifford Odets, had fallen apart (partly over his envy of her friendship with Albert Einstein, who "liked my vivaciousness," she said) and she returned to Europe. She married Robert Knittel, a publisher, in 1945. The two were married for more than 40 years, until his death in 1989.

She made a film for Paramount, "Hostages," in 1943, but that was it until 1997, when she appeared in a British production of Doestoyevsky's "The Gambler." She had other opportunities -- Federico Fellini asked her to appear in 1960's "La Dolce Vita," but she had a falling-out with the Italian director before filming -- though she didn't lament leaving movies.

Her life was quite full, with famous friends -- Arturo Toscanini and Thomas Mann among them -- and plenty of activity, including a few plays and TV roles.

She wasn't easily impressed, by Hollywood or fame. Asked about the Nobel Prize-winning Russian author Alexander Solzhenitsyn, who stayed with her and Knittel in London once, she told the Telegraph that he was "terrible."

''You could not talk to him about anything except his own work, you know? He was so conceited, and demanding!" she said.

Despite her long life, she told the Telegraph that she felt that there was so much more she wished to know.

"I know nothing. Nothing!" she said. "My God, one's lifespan is so very short."

Rainer is survived by her daughter, two granddaughters and two great-grandchildren.