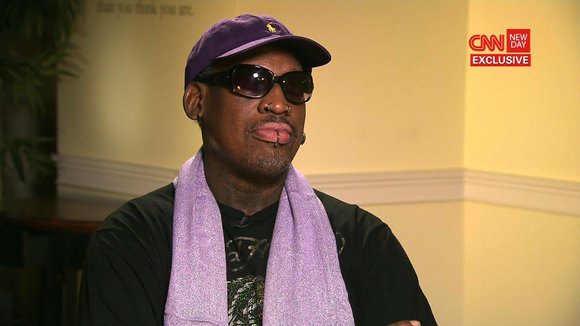 Former NBA star Dennis Rodman sits down with CNN's Chris Cuomo in an exclusive interview on Friday, January 31, 2014, from the rehabilitation clinic he is attending for alcohol addiction.

When Dennis Rodman entered the rehab conference room for our "New Day" interview Friday morning, it was far from clear how that interview would go.

He was silent -- and when he wasn't silent, he was combative. To the question, "How are you, Dennis?" the answer, after an uncomfortably pregnant pause, was "what do you mean?"

He was not at all pleased with the disposition of our first interview, and intended to make sure I knew.

"You know what you did -- you know" he repeated.

He seemed to believe I had violated an agreement against asking him political questions during our now infamous interview (no such agreement existed). "You started all of this," he told me.

If that's true, then I'm happy I did, because it ended with Rodman in a New Jersey rehabilitation center, doing battle once again with his alcoholism -- a fight that has consumed the most recent decades of his life. Unfortunately for Rodman, it appears to be a battle he doesn't know he's fighting.

Rodman's story of addiction and dependence is, for obvious reasons, extraordinary and unique. But by the same token, it is in many ways identical to the stories of countless others. He doesn't have a problem. He doesn't have to drink. He's somehow "stronger" than other addicts, and can stop anytime. He doesn't need rehab, and doesn't even know why he's there (it's only to "sort some things out" and to "think things through" according to him).

Rodman may be content to "hop around" the 12 steps, but it's clear the first one -- admitting you have a problem -- is still elusive. But Rodman is doing one thing, and not a small thing -- and he wants to make sure you know -- that he's "trying."

He tried to give us an explanation for what he said about Kenneth Bae. He tried to explain why murderous thug Kim Jong Un is somehow his "friend," and why he's able to turn a blind eye on the various human rights abuses Kim perpetrates ("that's not my job" to know, he kept telling me).

Neither were particularly satisfying, nor will they be to the family of Kenneth Bae -- his sentiment to "change places" with Bae is generous, but also a fantasy.

Dennis Rodman is many things -- a former NBA great and five-time champion, an entertainer whose antics and exploits have fascinated the world for years, and, by some accounts, a man who knows more about the leader of secretive North Korea than our own CIA.

But now, in this tiny room in this hospital in the shadow of New York City, it's not what Dennis is, but what he wants to become that is important -- a good father. He knows, and regrets, that he hasn't been. It's clear to so many that Rodman has to want to be sober first.

I wish him the very best in his struggle.