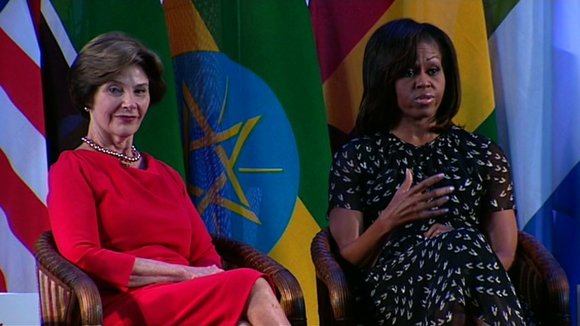 By Steve Brusk and Ashley Killough

Former first lady Laura Bush proposed that the future first gentleman should get the same scrutiny about his looks and style as first ladies have faced in recent decades.

Asked in a recent C-SPAN interview whether the media focuses too much on the first lady's hair, makeup and clothes, Bush said, "Yes. For sure."

"But I don't think we can get around it. Maybe when we finally have a first gentleman," she said. The interview was taped for C-SPAN's continuing First Ladies series and airs Monday.

"And maybe we should be that way about the first gentlemen, also, really critique the way they look all the time. Their choice of tie, or their hair style. Whatever. Or maybe their weight," she said.

Her remarks come after first lady Michelle Obama's 50th birthday was covered from all angles in the media, much more than her husband's 50th. And they come as another former first lady and former secretary of state, Hillary Clinton, tops numerous polls for the Democratic presidential nomination in 2016 if she decides to run, raising again the possibility the White House could get its inaugural first gentleman, who's also a former president.

No specific names came up in the exchange with Bush, but she was asked if she had any advice for a future first gentlemen.

"Stand back and be quiet," she said, laughing. "I don't know, it will be interesting when it finally happens what the first gentleman will do. I hope they'll take on men's health, perhaps."

Bush served as first lady from 2001 to 2009 when her husband, George W. Bush, was president. She consistently had higher approval ratings than her husband and was lauded for her fashion and style.

A librarian, Mrs. Bush tried to steer national attention toward reading and early child development during her time at the White House. She's also known for advocating for women's health and became involved in breast cancer awareness after her mother was diagnosed with the disease. The Laura W. Bush Institute for Women's Health was established at Texas Tech University Health Sciences Center in August 2007.