Ski New Mexico It Was More Than I Could Ever Imagine 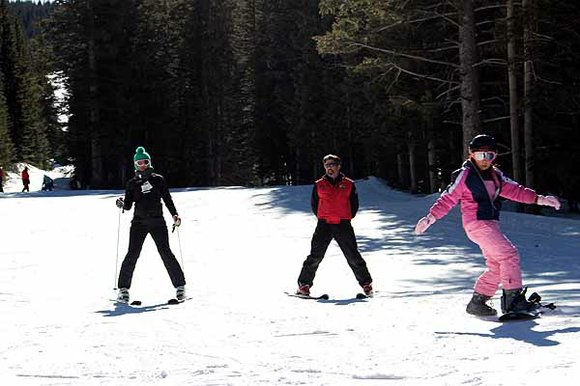 Houston Style Magazine's Rebecca Briscoe on the slopes with other media in New Mexico.

When I had the opportunity to visit Ski New Mexico last year, I immediately declined. What was a sista going to do freezing in the Southwest without a glam squad! You know in the South, black people don't ski or so I have heard!!! This year I wanted to embark on something epic and "grab the bulls by the horns." I felt that it was my duty as an African American female to immediately dispel the rumors of what we do or don't do during these winter months. Like Nike says, "Just Do It" was the quote I lived by during my fascinating journey to New Mexico. This weeklong trip was an experience of a lifetime where I was able to renew my mind, body and soul both on and off the slopes.

When I landed in the Albuquerque airport, which is a two-hour direct flight from Houston, I could feel hospitality sink into my bones as I witnessed some of the most remarkable works of Native American art.

Once we got off of the airplane we were whisked off to Santa Fe. Santa Fe was founded between 1607 and 1610, making it the second oldest city as well as the highest and oldest capital in the U.S. Santa Fe is a city rich in opulence, authentic food and New Mexico culture. The capital city is the heartbeat of the state, which boasts of Civil War defeats, the birthplace of some of the most sought-after artists, and hotel/spas that would tickle anyone's fancy.

Staying at Hacienda at Old Santa Fe was simply a dream. Can you believe I had my own butler at my disposal for the entire stay?? Javier, my trusted friend at the Hacienda, was "at my service" 24 hours a day, but trust me I didn't abuse the spoils. As an avid history buff, I learned that this hotel is the oldest hotel owned by Native Americans since the early 1900's. The Native American artwork that surrounded the hotel was captivating and the room had a cozy fireplace nestled right in the center of the room.

Don't forget to visit the Georgia O'Keefe Museum, which is dedicated to the life and legacy of the famed artisan. I was captivated as I literally walked through a virtual timeline of O'Keefe's artwork that has been celebrated for generations. The museum opened to the public in July 1997, eleven years after the death of the artist for whom it bears the name. Celebrating its 15th anniversary, the museum is the most visited in New Mexico making it the largest single repository of O'Keeffe's work in the world.

The Cathedral Basilica of St. Francis of Assisi was an eye-opener. The architectural structure looked like a creation built in Florence. This cathedral broke ground over 400 years ago, making it one the oldest parishes in the United States, and is considered the mother church of the Southwest dioceses.