Houstonian Honored as Champion of Change by White House 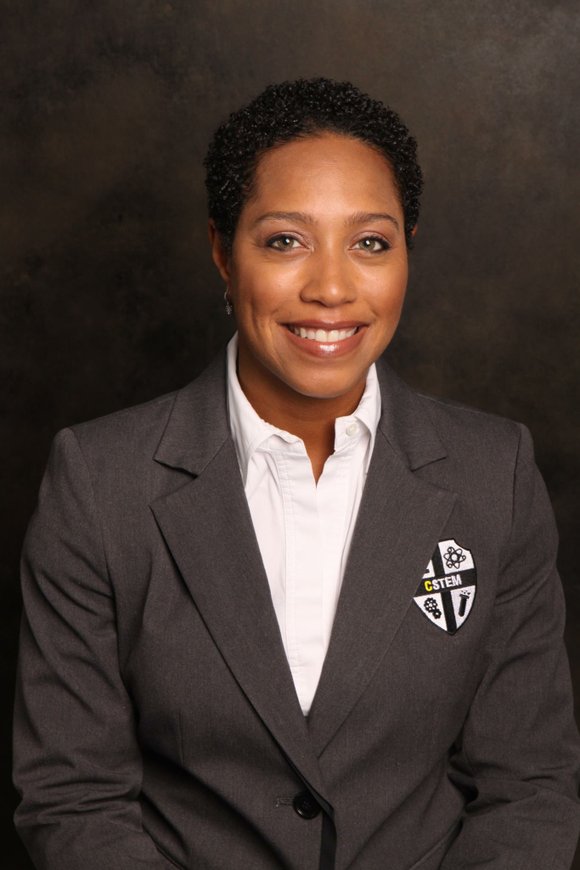 On Wednesday, February 26, 2014, the White House will honor ten local heroes who are “Champions of Change” for their innovation in creating diversity and access in STEM fields. These champions are creating opportunities for young people typically underrepresented in STEM industries by using unconventional approaches to enhance student exposure ranging from photography and film, to Hip Hop music, to coding competitions and community-based workshops.

President Obama issued an executive order creating the White House Initiative on Educational Excellence for African Americans to help restore the United States to its role as the global leader in education; strengthen the Nation by improving educational outcomes for African Americans of all ages; and ensure that American child receives a complete and competitive education that prepares them for college, a successful career, and productive citizenship. As part of National African American History Month, the White House Initiative is proud to honor these leaders for the work they do to make these goals a reality and to ensure even our youngest children become not only consumers in our global economy, but also creative innovators themselves.

The Champions of Change program was created as an opportunity for the White House to feature individuals, businesses, and organizations doing extraordinary things to empower and inspire members of their communities.

Kevin Clark, Ph.D, serves as a professor and director of the Center for Digital Media Innovation and Diversity in the College of Education and Human Development at George Mason University in Fairfax, VA. The Center was established to leverage the expertise of scholars and industry professionals from across the country to conduct relevant research, design inclusive digital media products, and provide access to quality educational resources for diverse audiences. Dr. Clark’s recent activities have focused on the use of video game design to increase interest in science, technology, engineering, and mathematics (STEM) careers; examining pathways and best practices for increasing diversity in STEM disciplines; and issues of diversity in the design and development of educational media products. In addition to his scholarly activities, Dr. Clark has extensive experience as a designer and consultant in the areas of educational video game design, online and interactive media, and issues of diversity and inclusion in children’s media.

Christopher Emdin, Ph.D is an Associate Professor of Science Education at Teachers College, Columbia University, where he also serves as Director of Science Education at the Center for Health Equity and Urban Science Education. He is also a fellow at the W.E.B. DuBois Research Institute at Harvard University. In these roles, he prepares teachers for STEM classrooms, conducts research in urban science education, and coordinates both the Science Genius B.A.T.T.L.E.S. and the #HipHopEd social media movement. The Science Genius B.A.T.T.L.E.S. are focused on bringing attention to transforming teaching, learning, and engagement in science by using hip-hop culture to create science competitions among youth in New York City Public schools. The #HipHopEd movement focuses on engaging the public in conversations about the intersections of hip-hop and education. Dr. Emdin writes the provocative “Emdin 5” series for the Huffington Post. He is also author of the award winning book, Urban Science Education for the Hip-hop Generation.

Andrea Hence Evans, Esq. is Principal of KidGINEER, LLC. KidGINEER, LLC is a creative and unique STEM enrichment program targeting students ages 5-10. After learning that by the third grade, a child has permanently lost interest in math and science, Evans formed KidGINEER, LLC to expose students to STEM at an early age. The program features six week hands-on classes focusing on civil engineering, chemical engineering, biology, electrical engineering, robotics, math and computer science. KidGINEER’s hands-on format is designed to expose students to STEM in a fun environment, while getting them excited about potential careers in STEM. Andrea Hence Evans, Esq. is a graduate of The George Washington Law School in Washington, DC. Evans is also a graduate of Spelman College and Georgia Institute of Technology (Georgia Tech) in Atlanta, Georgia, where she obtained a Bachelors of Science in Mathematics and a Bachelors of Civil Engineering, respectively. She participated in a 5 year dual degree engineering program. After high school, she received the Women in Science and Engineering (WISE) full tuition academic scholarship to Spelman College and Georgia Tech from NASA and worked on numerous engineering projects at Johnson Space Center in Houston, Texas as a Summer intern. Evans is also the Principal of The Law Firm of Andrea Hence Evans, LLC, an intellectual property law firm in the Washington DC area.

Eunique Jones Gibson is an Artist, Cultural Architect, Media Specialist, wife and mother committed to educating and connecting a new generation to heroes who have paved the way. In 2013, she launched the Because of Them, We Can™ campaign during Black History Month with a mission to encourage young people to honor the legacy of our ancestors through their own individual pursuit of greatness. The campaign, which has been considered one of the most prolific and virally successful Black History campaigns of all time, features photographs and video of adorable children channeling successful leaders, activists, and celebrities, past and present from across the African diaspora. In addition to the Because Of Them We Can™ campaign, Eunique is also credited with spearheading the I AM Trayvon Martin photo awareness campaigns in 2012. She is committed to using the arts, media and technology to advocate for social change and help people reimagine themselves.

Dr. Reagan Flowers began her education career as a high school science teacher and has since remained dedicated to her calling as a leader in academia. Dr. Flowers’ experience caused her to take up the mission of closing the academic achievement gap through the founding of C-STEM Teacher and Student Support Services, Inc. In 2002, Dr. Flowers created the nation’s first integrated STEM enrichment program for Pre K through 12th grade. She combined the experience she had as an educator with her personal childhood learning challenges and created a theory and action plan in her doctoral dissertation. For 12 years Dr. Flowers, has been implementing integrated STEM best practices into classrooms internationally. Dr. Flowers founded C-STEM using her personal resources and has led the organization in unprecedented expansion of services and revenue growth. The organization has impacted more than 100,000 students, and its revenue over the years has grown from $5k to more than $3 Million. Dr. Flowers has authored two books about STEM education, received numerous recognitions including being named in 100 Women Leaders in STEM and has been featured in U.S. World News Report for her WISE award nomination. Dr. Flowers is also on the national board of the American Leadership Forum. She continues to produce articles and blogs and links her success to three things: education, compassion and an “iron will” to make a difference.

Christina Lewis Halpern is the founder of All Star Code (ASC), a not-for-profit education organization dedicated to closing the systematic opportunity gap between young men of color and the tech sector. ASC will run attract, prepare and place its students in the technology sector via an intensive computer science and professional skills summer program, internship placements and ongoing mentorship and networking. Christina is a board member of the Reginald F. Lewis Foundation, a 2014 Echoing Green semifinalist, and has been profiled in Vanity Fair online. A former staff writer for The Wall Street Journal, her work has also been published in The New York Times Magazine and other publications. She graduated from Harvard College and lives in New York City with her husband, son and dog.

Felecia Hatcher is on a mission is to create 10,000 African American Start-Ups as the Co-Founder of Code Fever. Code Fever is an initiative that trains African American youth in the areas of technology and entrepreneurship. As an Author, Social Entrepreneur and the Chief Popsicle of Feverish Ice Cream, Hatcher has been featured in Black Enterprise as the Innovator of the Week, Essence Magazine Tech Master, the NBC Today Show, The Cooking Channel, and Grio’s 100 African American’s Making History. In 2008 she Co-founded Feverish Pops a Miami based gourmet popsicle company that donates a portion of every pop sold to building community program that target South Florida's 13 Targeted Urban Areas (TUA’s). Before launching Feverish and Code Fever, Hatcher worked as a marketing manager for technology and gaming companies. A frequent keynote speaker presenting engaging talks on Entrepreneurship, Tech Education, and Embracing Failure at Google London, Girl Scouts of America, SXSW, Coca Cola HQ, FBLA, DECA, TEDxMiami and TEDxJamaica. Hatcher is also the author of 2 books: How to Start a Business on a Ramen Noodle Budget, and the C Students Guide to Scholarships.

Dr. Danielle N. Lee is a biologist who studies animal behavior. Her current research examines the natural history and individual differences of African Giant Pouched Rats. Her science outreach efforts emphasize sharing science to general audiences, particularly under-served groups, via outdoor programming and social media. She blogs about her research, evolutionary biology, as well as diversity and inclusion in the sciences at The Urban Scientist hosted by Scientific American Scientific American Blog Network. She is also a founder of the National Science and Technology News Service, a media advocacy group to increase interest in STEM and science news coverage within the African-American community.

At eight years old, Kalimah Priforce held a successful hunger strike against his Brooklyn group home to add more books to its library, which drew the attention of a community of Buddhist monks and nuns who privately tutored him until the age of 14. By 16, Kalimah started his first computer tech company that primarily served low income neighborhoods and the elderly. After his teenage brother was shot and killed behind their childhood elementary school, Kalimah formed a lifelong commitment to transforming the lives of under-served kids towards mindfulness of their path and purpose. Kalimah Priforce is the co-founder of Qeyno Labs, an education innovation startup that works with local partners and schools to close the STEM diversity gap in K-12 education by harnessing the interests of under-served youth into STEM career pathways using web and mobile-based technology and inclusive hackathons that promote mentorship and innovation in the app space. Qeyno recently launched the first hackathon focused on Black Male Achievement in Oakland and has been featured on Essence Magazine, Jet, and NPR’s “Tell Me More”. Kalimah is a 2013 Echoing Green fellow and one of the driving forces behind The Hidden Genius Project, an Oakland-based program that trains black male youth in entrepreneurial thinking, software development, and user experience design.

Kimberly A. Scott, Ed.D. is an Associate Professor in the Women and Gender Studies Department at Arizona State University and Executive Director of CompuGirls. She is also co-leading the national STEM initiative STEM For All. CompuGirls was founded in 2007 as a technology program for adolescent girls from underserved school districts that offers participants opportunities to work with cutting edge digital media to encourage computational thinking, affect positive change in their communities, enhance techno-social analytical skills and provide a dynamic and fun learning environment that nurtures self esteem. STEM For All convenes a diverse group of researchers, practitioners, funding organizations, and policy analysts with interest, expertise, and knowledge in culturally relevant practices and its potential for positively affecting underprivileged students' digital creativity. An active scholar-activist, Scott’s work focuses on issues of social justice with an emphasis on girls’ of color social and academic development.